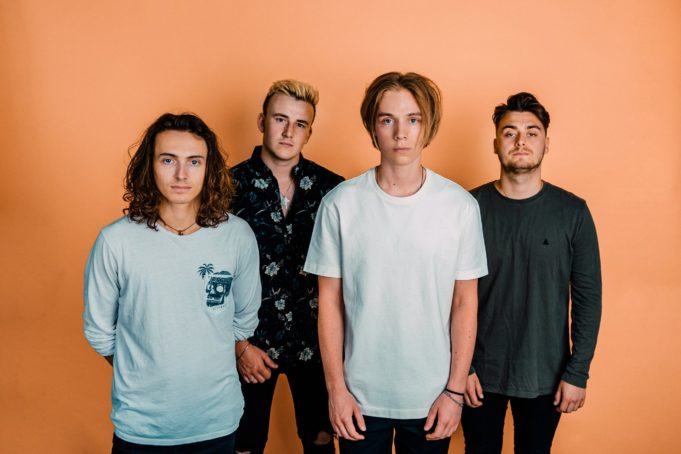 For those that haven’t heard of Sun Arcana… Where have you been? Taking inspiration from Muse, Royal Blood, Bring Me The Horizon and Paramore, the four piece band from Essex, England previously released their EP ‘As I Take A Breath’ with an amazing sound, the support of BBC Music Introducing in Essex and a dream of making it big, I caught up with Tom, Jules,Harry and Ryan on a particularly grim day at Reading after their set which they seemed pretty proud of.

Can you tell me about your EP ‘As I Take A Breath’ ?

J- It’s our debut EP, it has six tracks on it! We released videos for each song and it’s our first officially produced EP. We’re super proud of it and happy it’s finally out.

For those who haven’t heard of you, Can you describe your sound?

T- We’re like a mix of Muse and Paramore

Where did the band name come from?

T- yeah! I probably sound really pretentious but it’s basically an image of optimism and fulfilment so that’s why we chose it!

What made you think that music is something you wanted to do?

T- We’re not even that good at it really, no my dad got me into music really early and I kinda just picked it up

J- I wanna open for Muse one day

T- I’d like to open for Death From Above

S- because they’re behind us?

You’ve just played on the BBC Music Introducing Stage, How was that?

J- it’s so amazing to have played one of our favourite festivals.

T- I’m so grateful for the opportunity as we’ve always dreamed of playing festivals and even if it’s a smaller stage, it’s still an amazing experience

H- it’s so cool, we’re really happy to be here

If you could choose one song to listen to for the rest of your life, what would it be?

T- do you mean one of our songs?

H- that would be erm…

T- Oh then mine would be Let Down by Radiohead

H – Hotel California by The Eagles

Who has the worst habits in the band?

J- well Tom’s always looking in the mirror, Harry is always on the toilet, Ryan is always moaning and I’m probably always being a bit of a dick

Three things that you always take on tour?

J- yeah this is absolutely tragic, we were playing 2000 trees festival and before that we played Download Festival and I addressed the crowd and called them ‘Download’ and not once, not twice but three times and I finally realised and apologised but I got a big cheer, it was quite embarrassing!

What’s the best piece of advice you’ve ever been given?

J- Write music you love not for the hits

T- Didn’t Benji from Skindred say that? They’re actually super nice guys, they look like they would beat you up but really nice.

What’s next for Sun Arcana?

T- We’re recording at the minute