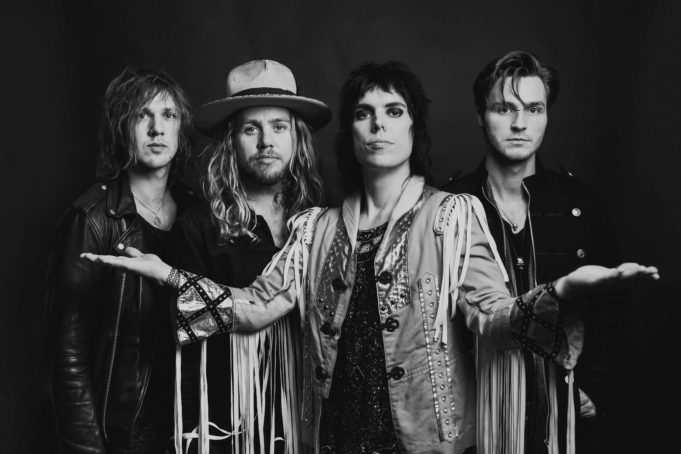 The Struts are incredibly underrated in the UK and seem to spend most of their career touring the states but finally, they returned. The Shepherd’s Bush Empire played host for Tuesday nights gig.  Luke Spiller certainly knows how to get the crowd going and reminded all of us what rock-n-roll was all about.

I chatted to Luke and Jed backstage before the show.

Can you tell me about your album ‘Young & Dangerous’ and what is your favourite track?

L- I would say it’s kind of like part 2 of ‘Everybody Wants’ in many ways. We didn’t venture too far out from what a lot of people had associated with us, musically. We felt that was kind of important and of course it has to progress which I believe it did but we weren’t ready enough to go really minimalistic or go super modern with the production. It’s just part 2. Some of my favourite tracks are ‘Primadonna Like Me’, ‘Tatler Magazine’,  ‘Somebody New’  and ‘Ashes’. It’s actually really hard to pick one

What has the fan reaction been like this tour?

J- Amazing! Considering we’ve put all of our energy into America, Australia and Japan to come back and do our first tour in the UK in four years and have sellouts. Even the room we’re doing tonight is actually bigger than some of the B Markets we do in America. It feels like what we’ve been working towards is paying off back home.

What was your favourite thing about performing at the Victoria’s Secret Fashion show?

L- I think how out-of-place we were and I thought that was really cool, in perfect Struts fashion. It’s kind of how we feel when we get here in many ways. It’s impressive what we do and I think people enjoy it and for the most part, when you’re in the United Kingdom and you’ll be like “Oh I’m going to see The Struts’, most people would be like “Who?” and It was a bit like that at The Victoria’s Secret show in some ways. It was a great experience and a really big tick on our to-do list. Not only were we like the first rock band to perform in a very long time to do it but we also played two tracks and closed the ceremony.

What has been your favourite venue to perform in?

J- Ooh We’ve had a few goodens! We supported The Rolling Stones a few years ago at Stade de France in Paris and it’s 80,000 people and it’s where France won the world cup. It’s a very very legendary venue. I mean we’ve had some amazing venues around the world and not to be too cheesy, where we’re playing tonight is even one that all of us wanted to play

What do you miss most about home when on tour?

J- Oh and Pret A Manger

L- The family and friends are something you will always miss but I really miss the grass, I know it sounds strange

L- No No, I just genuinely miss how soft the grass is and I miss being surrounded by history.

In your opinion, what is the best song you’ve ever written?

J- I would say on this album, a track called ‘Somebody New’. It’s one that the four of us did in an Airbnb

L- I would say the same

What has been the most surreal experience since starting your career?

J- Spending a whole year on tour with the Foo Fighters was a personal highlight. It was unreal and everything that came with that.

Visit thestruts.com for the latest news and updates!