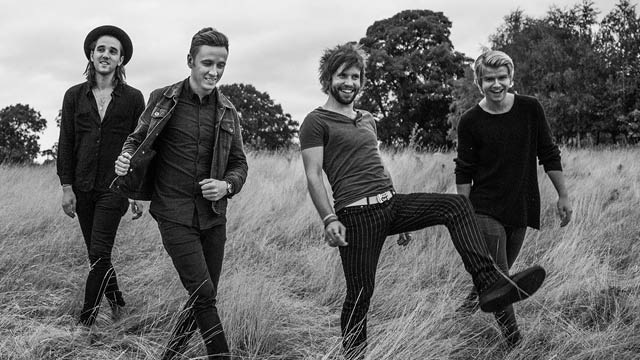 I sat down with Conor and David from Wild Youth ahead of their first ever London headline gig at The Islington in North London (which was sold out may I add).

Wild Youth, a new band, hailing from Ireland are taking the music scene by storm and are sure to be a hit with young girls everywhere!

Who came up with the band name?
C- I did actually! Kinda funny because there’s a guy who used to drink down our local bar and he’s an unbelievable storyteller. He would tell stories, he would go back to his childhood and he would say “Oh that was my wild youth”.

D- He was mental as well

You have a couple of singles out already; can we expect an album?
C- We hope so
D- Hopefully next year!

What has been your favourite gig to date?
D- There’s been a fair few but our headline show in Dublin was insane! It was our first headline in Dublin. It was hoping, so fucking cool! We never even thought we’d sell 10 tickets, we got there and the crowd couldn’t even move.

You guys have a free gig tonight in London, what made you want to do it for free?
C- It was our first London show so we wanted it to be more of an invitation for people to come and check us out. We aren’t in it for the money. We just want to open our door and get our music out there! We didn’t even know if people were gonna come. I couldn’t believe it when I got told the tickets are nearly sold out, I was in shock.

What was it like touring with Zara Larsson and Niall Horan?
C- We supported Niall in Dublin and It was his first headline show as a solo artist, we played that and I mean that was electric, so insane and he was such a great guy to us. That’s a show I’ll always remember for sure!

Describe your band in three words?
C- Four Best Friends Doing Something They Love and I know that sounds corny.
D- Conor that’s not even three words but I guess that’s the best way you could do it!
C- Oh I didn’t even count

What has been the craziest thing that has happened on tour?
D- Conor and I nearly got left behind in the Isle of Wight because we played there and got a little to fucked up, We decided that we wanted to make our own way home but we forgot that we were a long way away!

C- We turned our phones off and everybody was trying to get in contact with us, we rocked up six hours late and soaking wet.

D- Nobody would talk to us so we got fucked in the back of the van!

Have you had any embarrassing moments on stage?
D- I played Zara Larsson’s show with my zipper down
C- I wore a white suit last week and everybody said I looked like Johnny Logan

What can we expect from you guys in 2018?
C- More shows and hopefully some more music!