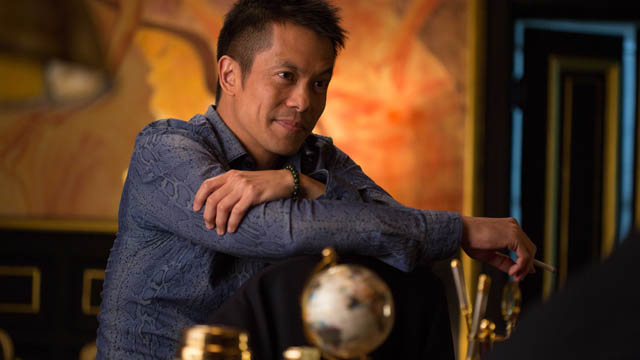 Firstly I would like to tell you I’m a big fan and I remember you from “Street Fighter” playing Ryu and Raz “ Man with the Iron Fist” playing Sliverline with the funny hair.Wow thank you that means a lot, let’s get started what would you like to ask?

Tell me about the movie “Absolution”?
Absolution is about Steven and my character “Chi” travel from New York to Russia to kill some bad guys like Vinnie Jones character. A bit of human trafficking with a lot of fighting from throughout this movie.

What drawn you to play the role of “Chi” and tell me about his character.
Steven and I have been friends for more than 10 years and we have done over 5 projects together, I have also worked with the director Keoni Waxman many times, so this movie was like working with family.

How was it working with Steven Seagal?
Steven is absolute legend, from the movie “ Under Siege” he was very big action actor of the 90”s, he is the 2nd World Master for Aikido and he loves Asian culture and he lives out there. He is amazing to work with.

He is currently filming another movie now, I wanted to be on that project but I currently have other commitments.

What was your favourite part of the movie?
Working with my cast members and also the location. I have never been to Romania (that’s where it was filmed), it was nice to learn the culture and experience the food. The people were so friendly. From the first day that I landed off the plane to finish filming each day. The team was amazing, everyone going out and eating together like a family, and I don’t know if it’s like that in England but in the states we don’t always get a chance to do that. That was one experience I will always remember.

Did you do any stunts for the movie?
Yes! I did nearly all of my own stunts, there are 8 big fight scenes and my character gets hurt in the movie, The fight screens were very vigorous and a lot of preparation went into each scene.

Did you have to eat a special diet to prepare for this role?
Many people ask me about diets and what I eat to get in shape, I don’t believe in diets. What you need do is eat 50% of fruits and vegetables, more vegetables than fruits, drink lots of water, and stay away from fried foods, I don’t do Akins diets, Nor any diets. Keep it simple! I tell my client’s the same thing!

Did you have any creative input with this movie?
Yeah I said to the director “listen, man you have to make “Chi’s” character funny, Steven’s character John is so serious and quite you have to balance it out.”

Thank you so much for your time and I can’t wait to see this movie!
Thank you Nureen, it was a pleasure Take care Bye.

If you want to watch a kickass-fighting movie with a sick story line then this movie is for you. If the trailer is anything to go by, the classic and smooth moves from Steven Seagal with the cheeky humour and fighting styles of Byron Mann and not forgetting Home grown Vinnie Jones playing a cut throat well-connected killer YES! This movie is one to defiantly one to watch!

Girls get yourself some brownie points from watching this movie with your date/partner or enjoy the view with the fight screens with your girls.

Guys this movie some hard-core fighting from beginning to the end, non-stop action. Puts UFC to shame Yes I said it and you will love this movie!

I already go my ticket “ Absolution” Absolute Must See!!

Absolution Release date 15th May in Cinemas near you