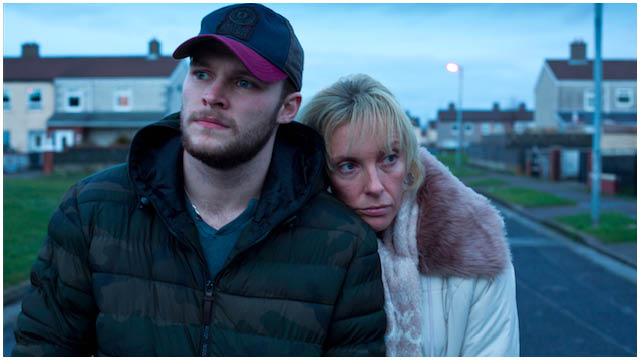 When I found myself sitting in the Bafta headquarters waiting in an empty room I thought to myself this Jack Reynor Interview was not going to happen as him and his people were slightly late, let’s just say I wasn’t too happy.

However, the moment he walked in a fitted t-shirt and wearing shades all was forgiven as my female hormones overtook and the cougar in me was on high alert. Even though I had seen a number of his films and his latest Glassland, I really didn’t expect him to be so cute. Anyway, we had a great chat about his new film, what it was like working with Mark Wahlberg in Transformers: Age of Extinction and whether he prefers Hollywood to Dublin.

Glassland is a pretty gritty and tough film, how did you get involved with this film?
I got involved after reading Gerard’s script, he had really written quite a profound piece of material and I watched the film Pilgrim Hill after that and was just astonished at how articulate he was and the depth of knowledge he had, far beyond his years, that’s ultimately why I signed up.

You star alongside Toni Collette in your new film Glassland, where she plays your alcoholic mother, her performance was pretty outstanding. What was it like working alongside such an amazing actress did she give you any tips?
It was a great experience, I think just from the nature of the material and the time-frame in which we had to shoot it, we kinda  just pulled together and was very collaborative with one another. Toni was certainly, as we all were, a little intimidated by the prospect of having such a short space of time on set. But it kind of meant we all came in and there was no room for mistakes and we just had to really hammer away at it. We developed, between all of us, a very intense and rewarding professional and personal relationship with one another, I certainly felt that with Toni to a certain degree, I just think her work was incredible and it was a great opportunity to work with her.

How long did it take to film and how short a time was Toni on set for?
We had 15 days altogether and Toni was on set for 4 and a half days.

The film doesn’t look as though it was easy to film, how much research did you do to get your character right?
I didn’t really have to do any research as I felt there was a lot already there in a way, you know. I kind of have a lot of experience with these issues myself in a way. I think you will find a lot of people in Ireland are probably in a similar position in that regards. I kind of felt it was more important that I have a good support system to come away from the film with and to have a kind of catharsis where I feel I could drop all the emotional and psychological intensity of it.

So have you come from a working class background?
Yeah I was, I think the pretty common misconception in Ireland is I would come from an Upper Middle Class background but I actually don’t, It was more like eating nettles by the side of the road as a child, maybe I fall in between the two.

You won the special jury prize at the Sundance Film Festival for this role; I can imagine that was a very proud moment for you. Tell us about that.
(A massive smile appears on his face at this point) Yeah it was massive, unfortunately, I wasn’t there as I had some personal issues going on in Ireland I had to deal with but to be recognised by an academy like that is obviously a massive achievement by any standards I think there are probably people who have worked their entire lives to win an award, it’s just an incredible thing for me really and I am just eternally grateful to them as an academy and to everybody that made that film with me, I kind of see in a way it’s a combination of everybody’s work. I pinch myself everyday when I wake up still.

Last year we saw you in Transformers: Age of Extinction alongside Mark Wahlberg and Delivery Man with Vince Vaughn, Haven’t you found it intimidating working alongside some pretty big Hollywood names?
No I don’t find it intimidating really because I don’t buy into the celebrity culture all that much, For me if I am going to do a job and I’m going to have a bit of a self-exploratory process, I don’t really think about people who are around me, I think about the characters but I don’t really think about their celebrity status. I think that kind of stuff is quite dangerous for actors to do. There’s no point as you’ll just fuck yourself basically (laughs).

You were born in the US but moved to Ireland at a very young age, so did you learn your craft in Ireland?
I would like to say I was one and a half years of age and focusing very intently on my acting career (laughs) but the truth of the matter is, I grow up in County Wicklow in Ireland, the place was isolated enough I suppose and I spent a lot of time in my own head and my own imagination, I think that’s where I developed most of it, I then went to secondary school where I became more involved with dramatic groups. Ultimately that lead to me calling an agent as I was leaving secondary school and him taking me on a trail run and everything went from there really.

That’s pretty impressive you actually approached an agent yourself when only leaving secondary school.
Well you know if you want to be a doctor you have to go to college and learn your craft, if you want to be an actor you must have an agent representing yah.

How did you manage to land your roles in Hollywood seeming as though you’re based in Dublin?
I went out to the Toronto film festival in 2012 with the film What Richard Did, That movie was quite critically acclaimed at that particular festival and there was an Irish agent who worked for William Morris who is one of the big agencies in LA. They took me on and we just ran with it and very quickly they got me the role in Delivery Man for Dreamworks so that was how it all transpired really.

Where do you prefer to be based in Hollywood or Dublin?
Ireland, I couldn’t see myself wanting to leave, I think it’s OK to want to stay here as it give me enough perspective to be able to portray characters truthfully I think, Right now it’s good for me so I’m not going to mess with it.

What I like about you is that you seem to be a pretty diverse actor and you don’t just stick to one genre of film. Do you just take any role that comes your way or are you a little more picky than that?
No I am very choosy now when it comes to scripts, I think I am kind of known to be very uncompromising when it comes to what I want to do and what I don’t want to do. So I read an awful lot of scripts, but it’s only something I feel that relates to me or something that I want to work on myself is the only reason I do a film really. I’m not driven by finance or fame.

What can we expect to see you in this year?
I think the next thing to come out is A Royal Night Out which is out on the 14th I believe, I’m quite excited about that movie, it’s about Princess Elizabeth on the night of VE Day and the kind of relationship she had. You can see the romantic comedy in it. It’s a really nice movie. Bel Powley is in it and plays Princess Margaret and it astonishing in it. Then Macbeth (which just before going to press was announced it would be in competition at Cannes 2015) with Michael Fassbender, then a couple of movies towards the end of the year The Secret Scripture with Jim Sheridan and then of course The Jungle Book which is a little further out on the horizon but that’s definitely coming along very nicely and its great working with Andy Serkis and all the rest of the crew on that movie.

GLASSLAND IS RELEASED ON THE 17TH OF APRIL.