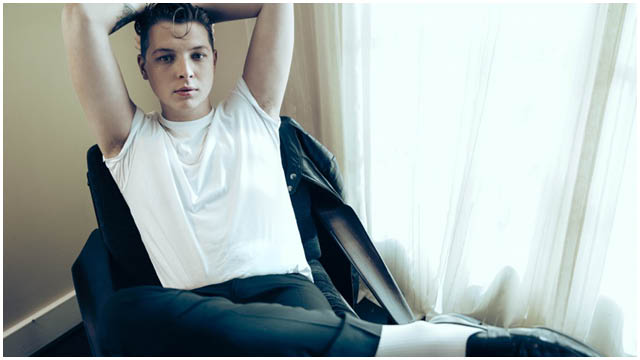 Hailing from the small town of Settle in North Yorkshire, John Newman made the UK sit up and listen with the release of his debut album Tribute, in 2013.

We caught up with the man of the moment at his record label in West London, to discuss the release of his new album Revolve, the story behind ‘I’m not your man’ and what it is that makes him self-conscious.

Hi John, how are you?


Your new album Revolve is due to be released on the 16th October, is it daunting putting out a new record after the success of Tribute?

It’s really daunting, I’m so nervous. I think the hardest part is that you can be a perfectionist and work on it to death, but you can’t force people to connect with something, especially pop music.

This album isn’t as rough; the format is tighter, the hooks are hookier and the lyrics are a lot simpler, I hope it’s good enough! On the whole, Revolve is definitely more upbeat and there’s a bit of a 70’s twang going on in places. Did you set out knowing you wanted your sound to progress in this way?

Very much so, I was in a much better place this time around and knew I wanted to make a summer record. I was in a really dark place when I was making tribute, I had just come off the dole when I signed my record deal; it was all a bit bizarre.

I was overwhelmed by it, because I was used to playing a guitar and singing in pubs, jamming with other musicians and now it was going to become this whole polished thing, I was scared about maintaining it. It was my girlfriend at the time who helped me through it all, then we split up and I was just left there, getting through having this brain tumour, in this house, it was horrible. Now it’s a totally different situation; I’ve been single for a year, touring for a year and I’m in a totally different mindset, I’m ready to see the world.

The amazing thing about this record is that it is positive in a lot of ways, but whilst I was making it in America, I met a girl and it was a really complicated situation. It was all very negative, I was dealing with her mind which was a bit fucking mental; so what you get there is something which sounds positive, but the verses can be quite dark in places.

Yeah, because some of the songs are lyrically very emotional, but the music doesn’t reflect that; it’s only when you stop and listen to what’s actually being said, that you can gage the context of the track. So is this all new turmoil? Do you think you’ve left your past pain behind, with the first record?

Definitely. I’m releasing a book on the same day of the record and it starts with me driving back to the house where the first record happened; it had been boarded up with metal and was becoming derelict. It was as though the house was the first record; it had been boarded up, it was done, it was finished – and now I need to make a new building, something that’s going to last longer this time.

Where do your ideas come to you? Do you find yourself having to hum into your phone, because you’ve got a hook idea whilst in the post office, or walking around the supermarket?

*John laughs* Yes! But I’m really self-conscious with it!

I hate it when I’m out with my mates and I get an idea, I hate standing there, singing pop tunes into a phone. If I’m down the pub on a Sunday, I’ll usually go into the loudest environment and pretend I’m calling someone *cunning*.

I don’t like being judged, “oh yeah, look at him singing over there!”

So does the melody always come first when you’re writing?

I tend to get everything all at once. It will either come to me naturally in the pub or in the supermarket; or if I haven’t had an idea, I’ll sit in the studio for a while until I come up with something usable. I always have a very clear view of what I’m trying to achieve with the sound, so if it’s not right, it’s not right.

So do you know what you want for the sound as a whole; drums, guitar, bass, piano etc… or do you work with musicians to fill in the gaps?

Yeah I know exactly what I want. Often on the demo’s, I will play the drums, the guitar, the piano and everything else that needs to be put on there; then if something needs replacing, I’ll get a musician in to make it blossom in that area. Do you have any favourite tracks on the new album?

I couldn’t pick an individual track, they’re all starting to make their own journeys already. Like with the Tribute album; I get updates that Losing Sleep is number 1 in Kazakhstan, or Running has entered the charts in another country that’s just picked up on me as an artist.

From Revolve, Tiring Game is already starting to make waves in America, Lights Down was the first track I put out and is really popular amongst my fans, and now I’ve just put out a track called I’m not your man, which is already getting a great reception.

So tell me about your new single I’m not your man?

This song was written about a girl who was in a relationship and basically about how I was being played, because she would be coming home to me and telling me about her negative day, her relationship, making everything sound really horrible and this guy sound really horrible; I’d be talking her through it, then I‘d suddenly think, wait, I’m not your man.

The middle eight basically says, ‘he’s cheated on you, get rid of him, grow some balls and stop bringing it home to me, give me the justice I deserve’ – which she did, but then I just turned out to be the next man, the middle man.

You lived with Piers from Rudimental, when you first started out. Is it a bit weird when you think of what you’ve both achieved since then?

We never really talk about it to be honest, but it is really cool. We’re both so busy that we don’t see each other that much anymore. We spent a lot of time together in the beginning; I remember when he’d just snapped a ligament and was pissing in bottles by the side of his bed, whilst I was on the dole.

We will always have this incredible connection, me and Piers; we made this amazing music together that’s still continuing to do us proud now, I’m so pleased that I got to do this with him. God, I sound like I had a baby with him!

Do you have plans to work with Piers again soon? Or is there anybody else you’re looking to work with?

I’m a songwriter for other artists, so I get to work with a lot of incredible people, behind the scenes.

Yeah definitely! There’s no pressure almost. It’s their name on the record, not my name.

So you can write something really shit and the other artist gets the blame? Sounds like what Iggy Azalea did to Britney…

*John laughs* Yeah, exactly! Not my tune, it’s yours mate!

You’ve got some live dates coming up at the KOKO in London and Albert Hall in Manchester, is there going to be a tour kicking off?

There is yeah, we just wanted to do some hot ticket shows to get people excited about the new record; the tour is going to kick off in the New Year, so look out for an official announcement soon!

Is Nina Nesbitt going to support you for the official tour, as well as these dates?

She’ll support me for the rest of my life, hopefully! *He laughs, but somehow I don’t think he’s joking* – No, that would be really cool but she’s just about to release a new album and from what I’ve heard of it, its going to be really successful, so maybe in the future I’ll be supporting her!

If we put your iPhone on shuffle, what’s like to come up?

Probably my own music! *He says he’s joking* No, Ed Sheeran.

What’s been the highlight of your career?

I came from an incredible small town, and now I’m able to perform to the millions.