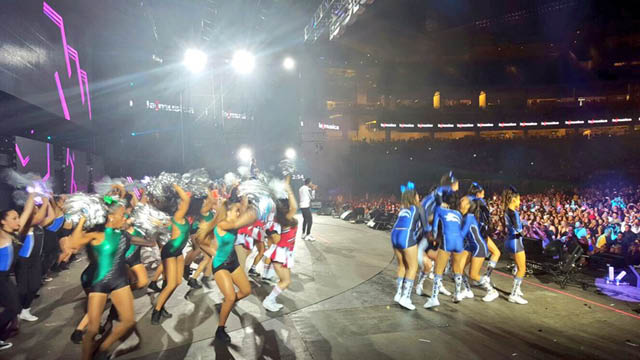 For those that don’t know who ‘Omi’ is, he’s the artist behind a song that you most likely would have heard called ‘Cheerleader’ and if you haven’t heard it, where have you been?

Can you tell me how Omi started out in the music business?

About 5-6 years ago I developed my catalogue, recorded a number of songs and started song writing and I met Clifton ‘Specialist’ Dillon through a mutual friend and that’s where the whole journey began, he heard a few of my songs, he loved every one of them, he became interested in my career and he wanted to actually build it, so I instructed him with that based on his portfolio and based on his experience.

Your massive hit ‘Cheerleader’ has had over 90 million streams on Spotify; it topped the charts in over 12 countries. What was the inspiration for this song?

It was basically remembering the past and show you the future that’s kind of my philosophy it was paying tribute to anyone who was that support system for you originally which I mentioned in a few of my interviews, it wasn’t supposed to be a song, it was supposed to be an intro on my album, I didn’t have music underneath it was just vocals but then it was made into a song, so we put in out back in 2012 and a lot of people loved it and we knew it had great potential.

Have you found your cheerleader yet?

I’ve always had my cheerleader; my No1 cheerleader in my life is my mum. But If you asking me am I seeing somebody yeah of course but my mums my no 1 cheerleader, she’s not going anywhere no matter what.

Your album was released in October; can you tell me more about it?

Definitely, this is my first album, it’s a project that means a lot to me only because a major part it is being my first, its something I’ve always dreamed about and so far I think its shows off a lot of diversity and it shows a lot of depth to me as an artist so it means a lot to me, its like a gift from me to my fans.

What was it like being on stage with Taylor Swift? Did she give you any advice?

That was an awesome experience, she’s just an awesome person and it’s not just because of her achievements but her as a person it was a wonderful gesture and I wish her all the best and all the success in her career as well, I think she’s very deserving of it and yeah we both traded advice as a matter of fact and that means a lot to me, I mean two different calibre artists but at the same time we were still able trade advice because I may not know things she may not know things but that was awesome right there. Will you be touring the UK anytime soon?

What music artists inspire you the most?

How are your family and friends dealing with your success?

A lot of people are pretty cool about it, there are still a lot of people who it takes getting use to but the good thing about it is I’ve always been the type of person that will maintain, to command that level of respect from people because it’s how I live my life, how I treat people in general, you can’t demand respect you got to command it, its like I’ve always been able to do that through my actions so I guess its pretty much maintained that.

We are just going to keep that flag soaring high I owe so much to my fans, I wouldn’t be here today, having a discussion with you as none of this would be worth it so I think I just want to keep the flag going high keeping bringing them good vibes, good music and lets all enjoy it together.

What are your plans for Christmas?

I want to factor in some family time definitely because I’ve been on the road all year following this major success, it keeps me rooted to the ground and I think we have to always need to make time for that, its my major goal this holiday season.

#Cheerleader is up for #SongOfTheYear at the #BBCMusicAwards! You can vote for Omi and Cheerleader here http://bbc.in/1TPYU4u