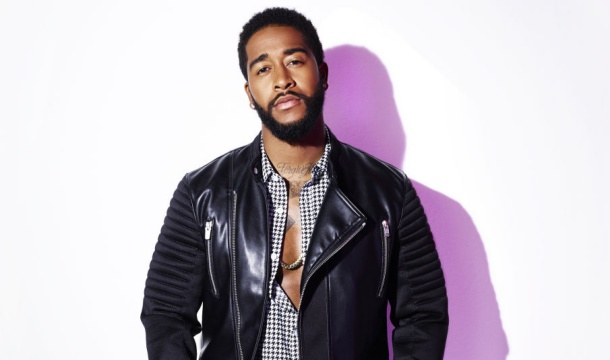 On a hazy sunny spring afternoon at Kensington’s busiest record label headquarters, Maybach Music artist Omarion strummed on his guitar and mingled with press and film crew, whilst effortlessly answering an afternoon’s worth of questions for interview sessions during his official press day.

Prior to his highly anticipated show at Koko London this Monday we now see a mature, humble chilled young man now in his 30’s who was once a member of the hit US group B2K when he was in his early teens. Omarion is thrilled to be in London, with his gorgeous long term girlfriend and co-star of Love and Hip Hop Hollywood, Ms Apryl Jones. Their simply adorable 7 month old son Megaa, also joins the couple overseas for the first time, on an new exciting adventurous journey with his parents.

Omari Ishmael Grandberry is a star. Having been in the game for over 15 years now, he first won the hearts of many teenage girls as the lead singer of US group B2K back in 1998 with J Boog, Raz B and Lil Fizz. Omarion is a singer, a talented songwriter, an amazing dancer and an actor. His filmography, and television appearances are equally as impressive as his archive of well produced studio albums. He’s starred in You Got Served (2004) The Bernie Mac Show (2004-5) One on One, and even Kourtney and Khloe Take Miami on E! back in 2009 and so much more. Fans are hoping he will continue on to star in Love & Hip Hop Hollywood Season 2, where he gives us a closer insight to his personal life. 11 years on Omarion is still one of the biggest male R&B artists, and is definitely a unique and favourable humble musician in his own right. Why? A few reasons. He’s current, he’s consistent and he’s dedicated. Music is more than a passion. It is his pursuit, of which he has impressively conquered, but continues to successfully deliver.

Grammy nominated performer Omarion has blessed us with hit singles such as Ice Box, Entourage, from an array of notable albums, ‘O’ (2005) ‘21’ (2006) ‘Ollusion’ (2010) and most recently last year ‘Sex Playlist,’ (2014). In the interim along the way, he dropped a few excellent EP’s – Care Package 1 and 2 (2012-13), a gentle reminder of why he is known for his talents, worldwide. There’s no question or doubt as to why Maybach Music boss Ricky Ross scooped up Omarion and signed him without hesitation. A triple threat would be an understatement. Life is good. Flavourmag caught up with Omarion, during his long awaited UK X Europe tour, which kicked off in Birmingham at the beginning of the month, and will finish next week in London March 16th.

Kemi: How are you doing? How’s the family and little Megaa, he should definitely have his own Instagram page he is too cute!
Omarion: My friends are like OK you can you get Megaa his own page, so we don’t have to keep coming to yours!

Kemi: He would get so many likes!
Omarion: Omg! [Overwhelmed by the thought]

Kemi: How are you finding juggling fatherhood, and touring, with this being Megaa’s first trip abroad?
Omarion: Yeah it is, he got his stamps! I was just saying to a friend of mine I didn’t get my stamps and didn’t go abroad till I was well off into my teens! [Laughs] It’s so cool to be able to share this experience, and these memories with my son. It’s so cool because, he will look back at the pictures and be like, ‘Yo I gotta go back there!..’

Kemi: What’s your favourite thing about London?
Omarion: Well truthfully, it’s the music. I know that might sound cliché coming from a musical artist but I always felt like when I listen to the music there is always this cultural sound. Of course when you’re from the west coast and you hear DJ Mustard you understand it.

But for the most part, when you go out of the States, out of the country and you go to London? There’s so many different genres of music. Afro beats, the house sounds are different to the house music in Vegas, different dances, and the migraine skank [Laughs] and I’m just like ‘Yo this is super dope!’ And grime.. wow

Then there’s Drake and Kanye giving it up to those artists. I love it because, music has it’s way of travelling around the globe. For a little while ATL had it, then LA has it, then New York has the sound.. and now it’s come all the way across the waters to London, Man I love it, I love it.

Kemi: What your favourite food when your here?
Omarion: Yes. Caribbean food. [Jamaican accent] Yeah, man mi have to eat some plantains, some brown stewed chicken you dun know!’ [Nods, both laugh]

Kemi: Would you ever do a 30 day vegan challenge like Beyonce and Jay Z?
Omarion: Yeah, I could do the fish. The vegan challenge, it doesn’t seem like it’s that hard though.

Kemi: A good detox perhaps?
Omarion: Yeah, it seems like it’s really good for the body.

Kemi: You did a song with Jeremih last year produced by Da Internz called ‘Show Me,’ an amazing song with an artist who in my opinion is super talented but somewhat underrated. Who in your opinion do you think is underrated?
Omarion: Well you know what Imma tell you..

I don’t believe in artists being underrated. The only reason why is because I’ve even heard that of myself. People are like ‘Omarion is so underrated.’ No I’m not. It’s just about timing. It’s about people catching up and it’s about them actually seeing and appreciating what the (individuals) talent is, and I think that there’s so many different forms where people ingest music, and it happens in different ways. And right now it’s the digital world and there are so many artists that live online that never see radio or television, and only have a following purely based upon their music digitally, so that’s the only way that people can ingest it. There’s a certain sound and a certain feeling…

I just happen to be a part of a vast channel where there’s music and it’s online, it’s movies, it’s television, so I feel like that’s why I don’t believe in an artist being underrated. It’s just about timing, I think Jeremih is really talented. He’s a great song writer too.

Kemi: Your song featuring Chris Brown and Jhene Aiko ‘Post to Be..’ [Omarion breaks into song, *That’s how it post to be! Heyyy!* Both laugh] Such a huge hit.. And also thank you for Care Package 1 and 2 I literally had both EP’s on repeat..
Omarion: Ohh see now you’re a real musical fan, I appreciate you! [Laughs]

Kemi: Thanks! So wait, we’ll go back to the Chris and Jhene question. Your born 1984 so your 30, I’m 33, 80’s babies so did you grow up listening to the old school artists, H Town, Jodeci..? Do you like Jodeci?
Omarion: I love Jodeci, what chu mean? Of course! All of the classic R&B. Loved it. Great times!

Kemi: Do you have a favourite song of Chris and Jhene’s respectively?
Omarion: Chris Brown and Tyga did a song together on their album, Fan Of a Fan, called ‘It’s Yo Sh*t,’ featuring Wale,’ It’s real wavy. You should check it out, that’s the current most recent song that I particularly like. And Jhene is ‘The Pressure,’ [Breaks into song] That’s my song.

Kemi: What’s your favourite era of music?
Omarion: Probably the 90’s, because that’s the era when music was fully being capitalized on. People were making money during that time. That’s when Bill Clinton was in office. It was a great time and people were happy.

Kemi: Can you tell us three things you can’t go a day without?
Omarion: Three things.. Well I guess my son is not a thing! Probably my phone, music, and food. I mean.. Is that a thing? That is a thing right? I gotta eat, I gotta entertain, dance and sing, and you know I gotta check on the money, I need my emails. [Laughs]

Kemi: When you get a day off, when your with your family , what’s your favourite thing to do?
Omarion: Well truthfully, I really love what I do. Of course I’ll take my son and my baby out, but for the most part, I love to spend my time creating. I think that when you’re creating your assuming the position of fulfilling your purpose. I love to create, It doesn’t just have to be music, dancing, or writing it could be playing uhm.. what’s my dam game that I like..! Hold on lemme tell you… Candy Crush!
[Laughter]

Thank you so much for your time Omari, Flavourmag love you.

Omarion’s new single produced by DJ-Mustard ‘Post To Be,’ features Chris Brown and Jhene Aiko and is available on iTunes, and has accumulated over 16 million views on YouTube (OmarionMMG) Catch Omarion’s headline show at Koko London for Musicalize on the 14th and 16th of March 2015