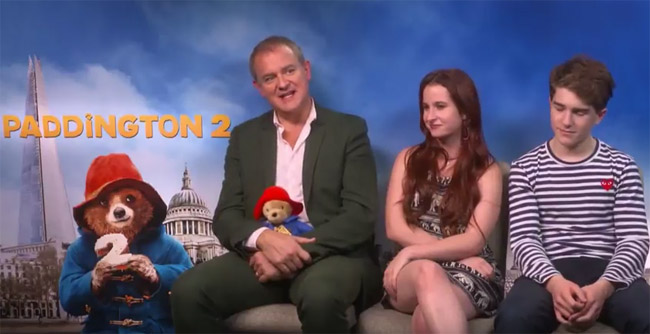 The cutest marmalade sandwich loving bear is back on November 10 in the follow up to his 2014 outing in Paddington 2.

Writer/Director Paul King has done it yet again by making this delightful “kids” movie not only just for the ankle biters but adults will love it too. Audiences are transported to an amazingly nostalgic world of the classic pop up books in some wonderfully beautiful scenes as well as starring a brilliant turn from Hugh Grant as the villain of the piece and putting poor old kid hearted Paddington behind bars.

Watch all the video interviews below.

Paddington 2 is in cinemas from 10th November.

The much-anticipated sequel to the worldwide hit family film finds Paddington happily settled with the Brown family in Windsor Gardens, where he has become a popular member of the community, spreading joy and marmalade wherever he goes. While searching for the perfect present for his beloved Aunt Lucy’s hundredth birthday, Paddington spots a unique pop-up book in Mr. Gruber’s antique shop, and embarks upon a series of odd jobs to buy it. But when the book is stolen, it’s up to Paddington and the Browns to unmask the thief…