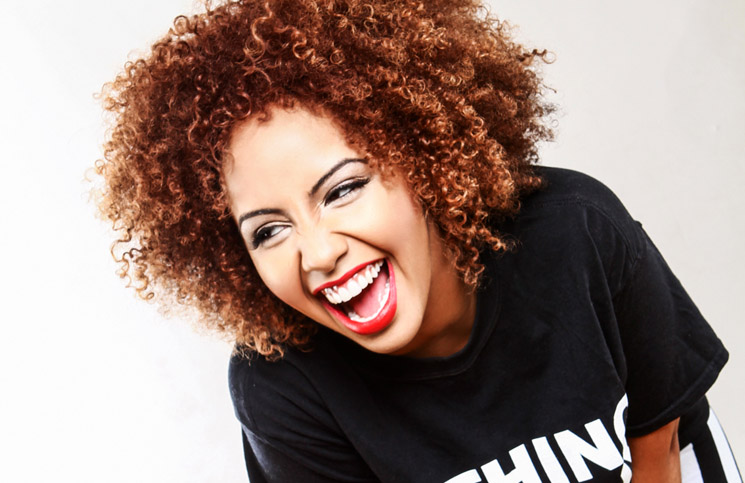 Not only does she rock a stylish auburn afro, she’s also that jovial, zippy voice you hear way before breakfast! With an unwavering fixation towards Hip-Hip crooner Drake, breakfast show host Jade Avia loaned us a fine slice out of her hectic schedule to wax lyrical about scoring her dream job, being hurled abuse at by social network goons and why she once wanted to have braids whilst finger fiddling a piano. Here, Jade open’s up about the realities of being a successful radio presenter, and believe me it’s far from the ideal for the sluggish type! She not only wants to make mummy proud, she also wants to rule the world! Tell about your early ambitions, did you always want to be a presenter or did you have dreams of becoming something more subtle like, I don’t know, a bus driver?
[Laughs] Of course I wanted to be a bus driver-Bashy was my inspiration for that! No, actually my early inspiration was to be a singer. Alicia Keys was my huge idol! I wanted to be just like her and play the piano, have braids and then I woke and went to University and that’s where I found my ambition to be a radio presenter.

When I listen to you in the mornings there’s never a dull day. Do you have any rituals you perform to get yourself amped-up before you go live on air or are you naturally just a morning person?

I don’t know if I was a morning person before the breakfast show but because it’s something I love I’ve definitely become one! I have no rituals, I don’t even drink coffee. However, don’t get me wrong when Kojo and I are sat discussing ideas for the show at 5:30am, I’m just like ‘Yeah, let’s do whatever’! It’s not easy but when you love it you do it, it’s so much fun that the three hours fly by! My day plans out like this – breakfast show, gym, few meetings and then any other things I need to sort out.  In the evenings if I’ve got enough energy I’ll go to an event. There’s always something going on!

Saturday is my only day off so I tend to spend time with family or just sleep the whole day away, literally! Then on a Sunday it’s about planning the Sunday show which is from 4-8pm.

Surrounding the whole re-branding of the radio station, I’m sure you were aware of the public’s negative reaction. What were your thoughts on some of the comments?

I got a lot of abuse over it and people were saying some horrible things. I think it was really sad to see something I loved go. I presented on that station [Choice FM] for over a year, I have deep love for it. I understand the public’s view but at the end of the day it’s a business and changes have to be made for growth.  I’m young and this is my big opportunity to present on a National radio station, so I was really excited. I love the show and I wouldn’t change a thing! Kojo regularly uploads clips of you guys having a good time in the studio on Instagram. How much fun do you guys actually have at work?

A lot! It’s a laugh listening to the tunes that we love and dancing along. Exactly what you see on the clips is exactly what it’s like in the studio.

What do you love most about your job?

If you could have another personality presenting with you guys who would it be & why?

Drake because he’s my babes!

What does it take to be a successful radio presenter?

Determination, motivation, graft and being humble; Just knowing when it’s your time.

Are there any songs in particular that you’ve been forced to dislike due to constant repetition?

Not any in particular, there are however songs that I can’t get enough of – there are songs that you could literally sit me in the studio and just play it back-to-back and I will still love it, like Kid Ink!

If you could pick anyone to act out your life story who would it be and why?

I would want to say Drake but that would be weird! Megan Good because she’s hot!

Do you ever Google yourself?

Yeah, when I’m bored; In fact I did it the other day and I found lots of new pictures of myself and I was like ‘Heeey’.

Tell me about any recent fashion flaws?

I accidently dyed my hair bleach ginger the other day that was quite funny. It was a bright bleach blonde slash ginger. I have the pictures up on Instagram, check it out! What’s been a defining moment in your career?

I think finally cracking on with my LipGloss And CandyFloss show. I ended up shooting Gossip Match because of it which is a TV show that’s going to be out on Trace Sports TV. It’s great because it’s outside of the radio station, it’s my own thing, and it’s what I love to do; debating with my girls. Also doing the Sunday morning shows between 3-6am was probably one of the hardest times, I was absolutely knackered but I am glad I did it because now they’ve given me my own Sunday show between 4-8pm.

So New Years just passed. Did you have any New Year’s resolution or do you not take notice of that?

To be honest I think by giving yourself New Year’s resolutions you’re putting a lot of pressure on yourself when realistically all you need to do is give yourself mini goals. I think what’s more important are your life goals which is what I go by. One of my life goals was national radio by the end of 2013 and I did it!

What plans do you have for the future in terms of your career?

In terms of my career, world domination! In life, be happy, make my mum proud and make sure my niece has everything she needs.