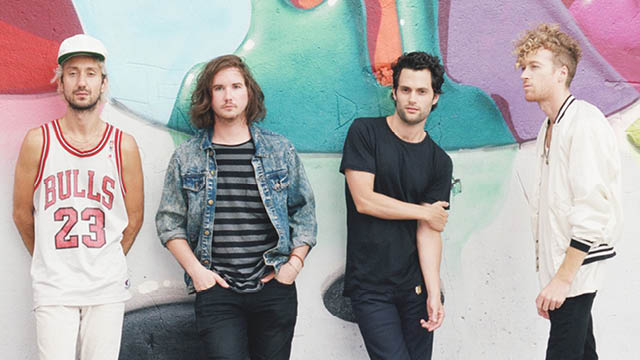 MOTHXR pronounced Mother are a relatively new band from the states setting to hit the UK by storm.

I had the chance to sit down with Penn Badgley from MOTHXR in East London on Tuesday to chat about their new album ‘Centerfold’.

Can you tell me how you all came together as a band?
P- Jimmy and I met in 2011 and I met Darren soon after that, a year later I met Simon and he was passing through at the time, I never thought we would work together. Jimmy and I knew that we did want to work together as we talked about music so much, we had so many mutual friends and Darren is one of those people. We all really wanted to record something and we got together in LA and finally had time to do that. The first song we recorded together was ‘Impossible’.

Your album ‘Centerfold’ has been well received; can you tell me more about it?
P- it’s an unintentional concept album, it’s exploring the same theme in eleven different tracks in eleven different ways and eleven different perspectives. I think that’s a place of lust and despair but also with this mystical sense of search, of seeking and surrender.

How would you describe your sound to people who haven’t heard you before?
P- I’d say it’s alternative RnB, Indie Rock, and New wave.

What’s your favourite song to play on stage?
P- Victim

I will be watching you for the first time tonight, what can I expect?
P- It’s heavier than the record, it’s a good time and hopefully its pretty musical, It raw and all live.

If you could take this tour anywhere, where would it be?
P- Asia, I think it would be really fun!

Have you had any embarrassing moments on stage?
P- Yeah, I remember I forgot my picks and had to play with my fingers. It’s completely different playing with your fingers than with picks, sometimes it will start playing a loop when I’m not meaning too. It fucking sounds terrible and sometimes it will come unplugged and there are no vocals. Sometimes it’s pretty raw but at this point I can’t imagine something that embarrassing, you just make do.

What’s the most important thing you’ve learnt as a band in the past year?
P- I’ve learnt when to listen.

Are you performing at any festivals this year?
P- we are but its kind of boring political answer and we might just pull out and record. We have some opportunities that are exciting and we will play some.

What do you miss most about home when travelling around the world?
P- I miss a good toothbrush, my girlfriend and my dog. I also miss time to myself