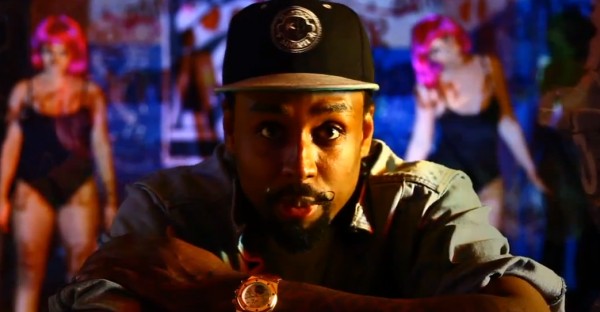 2013 was no different from 2012, 2012 no different from 2011 and so on; an array of artists made last ditch plays for the realms of pop serenity and the majority failed. This development is no longer bewildering but rather inevitable. However, as we drew closer to the end of this the calendar year, one rapper attempted to play things a tad differently. South London’s XO Man has been long respected for his steadfast refusal to toe the line; churning out music packed with energy, emotion and anything else you could think and hoping the rest will fall into place; it usually does. One of the sounds of 2012 was Family Guy inspired phenomenon QUAG; XO’s successful single that swept through nation like an epidemic; racking up a myriad views; yet he wasn’t making contrived electro records that artists now release in multitudes.

After that success the rap giant would not be heard from until November 2013; perhaps he was kicking back observing the generic sounds that had swamped our airwaves, perhaps he eventually decided enough was enough, swooping in just as things were about to become unbearable. Perhaps that is more my imagination than the facts but regardless of his absence; swoop in he did and once his belated assault on 2013 began, the 6 ft 10 rapper has refused to release his stranglehold.

“They are scared of anything new, anything just not part of the formula; that generic ‘house’ thing that they have going on. They are scared to come out the box and do something imaginative or risk on something else”.

XO crowned his return with Amazing, a damming critique on the music industry and the vices he perceives to be the cause of its restraint, he described it as an ‘emotion you go through,’ and to ensure listeners understood that emotion, he was deliberate in ensuring that the video was far from elaborate. “Fully, black and white, one shot, no edits. Simple.” Shortly after followed the release of the Calm EP and with such a title it only makes sense that the Storm EP will follow (although there is no release date as of yet).

Rather admirably this has all be conducted independently; no assistance from a record label; a contingent who XO describes as ‘scared of anything that isn’t classed as normal.’ “They are scared of anything new, anything just not part of the formula; that generic ‘house’ thing that they have going on. They are scared to come out the box and do something imaginative or risk on something else.  The South Londoner continues with an example; “If you’re from Tokyo and you do Reggae music they are scared of that because it’s not normal. That should be something WOW; it’s amazing, let’s go with that. Instead they want to have someone that resembles somebody else; it’s a safe bet so they can pay their rent.”

One man who has certainly helped record label executives’ pay the rent is XO’s good friend and fellow musician Ed Sheeran. Believe it or not the Suffolk bred crooner did not spontaneously spawn with the release of 2010 single ‘The A-Team,’ he had been on the circuit for some time struggling no end before eventually prevailing. It was on this journey that XO and Ed Sheeran first crossed pasts. The former briefly struggles in recollecting exact the location before eventually deciding that it was at  a gig in which they were both on the bill. Years later and the acoustic marvel is featured on XO’s upcoming single Killing All My Enemies With Love; a track XO describes Mr Sheeran as perfect for, “’You need me man I don’t need you,’ explains it all. Ed came from the same kind of place where he wasn’t accepted at first. He wasn’t always the Ed he is now so he understands where I’m coming from.” Up until this point XO Man has only unchained a short one minute snippet; keeping the full version along with an animated video in stock for an early 2014 release.  It is not their first collaboration either; in 2011 they collaborated on Follow Fashion; XO’s lead single of that year.

“It’s crap, everyone is just trying to save their ass and kiss ass at the same time. There is no innovation. People don’t embrace change.”

XO’s early part of 2013 was spent in the USA; he describes his excursions as a ‘working holiday’ where he met with DJ’s, producers and ‘so called important music folk.’ In the midst of meetings and consultations he found time for music; performing state to state; including shows in New York City and an unforgettable experience on Hollywood Boulevard in the sunshine state of California. ‘Not similar at all’ he says of fans in the US and the UK before stating “Fans are real over there. If they like your shit they will tell the world that they love you and shit and they want to be part of your stuff. They embrace and then want to see something move forward. Over here fans are good but it’s the industry that kind of clog things up. They don’t let things breathe as much over here. Over there it’s nice, your appreciation is crazy, that might just be me coming from another country but they seem a lot more receptive.”

From listening to the 6ft 10 giant speak it is clear that the criterions laid out for both himself and his music are exceedingly high; as should be the norm for any professional hoping to excel in their respective field, but it is a trait he does not necessarily see when reflecting on the rest of the nation. “They are happy with the current state of being okay, I don’t want okay. Morleys is okay, I want amazing. Music is something that I can afford to buy, I’m a billionaire when it comes to music and I don’t want okay music.

“Over here we are just okay, they let a couple of us through the door once in a while and that’s it. They don’t want to compete, they look at America like Gods, they don’t want to be Gods in their own right. They are just happy being there, just existing.” He continues in rather blunt terms, “It’s crap, everyone is just trying to save their ass and kiss ass at the same time. There is no innovation. People don’t embrace change.”

Mass change can take only the smallest catalyst; perhaps XO Man will be that spark, and maybe I will start next year’s interview with the phrase “2014 was a year like no other.”