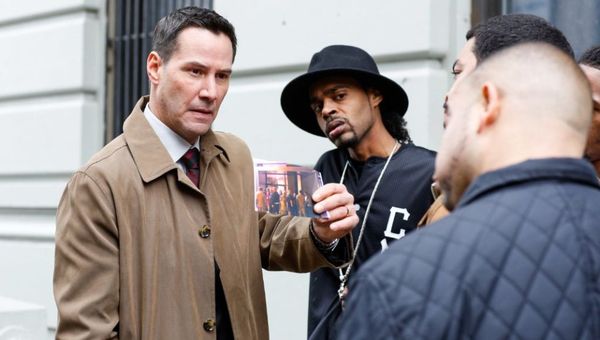 Just because Keanu Reeves stars in this confusing shambles of a film does not mean by any terms that this one is worth a watch – in fact, you may just wonder why you have wasted 98 minutes of your life on something that simply hasn’t got a clue what it wants to deliver.

Exposed is split into two stories that are meant to merge into one for its finale. The first being the story of NYPD Detective Scotty Galban (Keanu Reeves) who is hell-bent on solving the murder of his long-time friend and partner. With no real evidence to work with until he stumbles across a picture of Isabel De La Cruz (Ana De Armas) and randomly comes up with the idea, she could very well be a witness to the crime. The other concentrates on suspect number one – a young Hispanic and extremely religious Isabel as she has supernatural visions (which have no context at all in the story) – these consist of ghostly white figures that remain mute but pop up at moments during the film which won’t make sense until the end – and believes these are signs from God. She mysteriously becomes pregnant even though her soldier husband has been stationed overseas for months. It turns out this young woman has been a victim of child abuse and her unstable mental health unravels itself at the very last minute to bring a more than welcome end to the film. We can’t forget another suspect in the murder of the dirty cop comes in the form of a very nasty gang member played by the rapper Big Daddy Kane.

The one positive aspect of this film has to come in the cinematography, its use of lighting and location of downtown Manhattan gives it that eerie atmospheric feel with an impending belief of dread. Aiding in its air of mystery and confusion to what the hell is going on. It would seem the mystery surrounding this film doesn’t just come from the storyline. It would appear the writer Gale Linton could also be the Director Declan Dale! Linton had a run in with the studio after they re-cut the film, prompting the studio to come up with the Declan Dale pseudonym. Reeves performance see’s him sleepwalking through the whole sorry saga, it’s lackluster and painful to watch and you simply couldn’t care less about his character. The same goes for his suspect Ana De Armas who can’t quite hit those emotional notes of the victim she really is.

Exposed is released in Cinemas and On Demand 26th of February.