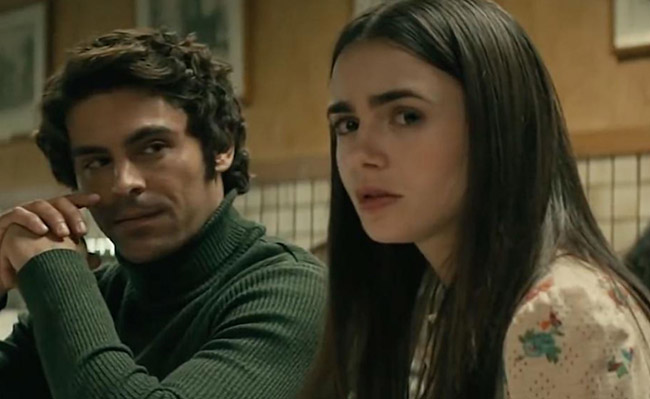 If it wasn’t for Zac Efron embodying every inch of Ted Bundy’s charismatic persona with a stunningly mesmerizing performance we’d be left with a forgettable affair.

Better known for his documentary work on Irish gangster Whitey Bulger and the West Memphis Three, Joe Berlinger takes a stab at turning another true crime story into Hollywood movie fodder. Having worked on both the Netflix documentary The Ted Bundy tapes and Extremely Wicked… simultaneously his knowledge of the charismatic serial killer delves deep into the psyche of what made his subject such a magnetic character making him more than qualified to quench our thirst for curiosity but he ultimately fails to deliver a killer blow.

Berlinger takes a different approach with the film, one that comes from the perspective of Bundy’s fiancé Elizabeth Kloepfer. Played by Lily Collins, Kloepfer is a single mother who can’t resist the charms of Zac Efron’s Ted Bundy. Building a life and a family together over a number of years they seem like any other suburban family unit. With Ted’s increasing absence and the news filled with the horrendous details of a serial killer targeting young women, her suspicions about the man she loves dearly begin to plague her mind.

As Ted is eventually caught and held in prison, awaiting trial, the film, which is based on the book The Phantom Prince: My Life with Ted Bundy slowly changes its focus from Kloepfer’s surface denial that Bundy is innocent – they say love is blind – and refocuses on the main events leading onto Bundy’s execution. To be frank is no great shame. Despite her best efforts, Collins just can’t fatten this character up. We watch as the woman spirals into heavy drinking, questioning her life with the man she thought she knew, but there simply is no meat on the bones to really sink her teeth into.

On the other hand, Efron is finally shedding his one trick pony roles and puts in a shockingly brilliant performance as Bundy. The onetime child actor that sung and danced his way into the hearts of most teenage girls with his baby blues with High School Musical is getting his chance to flex his acting chops with credibility. He’s cunning, charming and makes for such a convincing Bundy it’s hard to separate the actor from the character. It’s an astonishing portrayal that will have you believing Bundy is innocent until having to slap yourself out of his hypnotic trance.

Whilst trying to keep the focus on Kloepfer, screenwriter Michael Werwie and Berlinger have left out one crucial element, any detail of the vicious murders committed. It’s evidently obvious why they have gone down this route, a rouse to fool the audience into the shoes of Kloepfer to try and make us understand how any woman could be taken in by such an audacious sadistic creature that could charm the pants of anyone. Unfortunate for them, it’s the one element, alongside feeling like a repeat of The Ted Bundy Tapes, that is sorely needed to lift it out of the monotony.

If it wasn’t for the mesmerizingly believable performance from Efron, Berlinger’s dabble with the big screen would turn the story of Bundy and Kloepfer into a pretty forgettable affair.