For International Women’s Day, I want to celebrate this group of female eco-warriors from all over the world that are members of a 2-year all-female sailing voyage to find solutions to reduce the plastic endemic problem in our oceans.

Founded by skipper Emily Penn, eXXpedition is a research mission that is literally sifting through the millions of tonnes of plastic rubbish that has been thrown into our oceans. With these 2 years of research work, these women plan on finding solutions whilst picking up garbage along the way.

My friend Jessica Patterson was on board Leg 6 and told me she wanted her crew’s voices to be heard.

Aboard her leg 6 which was Panama to Galapagos, there was an artist Candy Medusa, a process engineer Camila de Conto, a doctor Dr Hilary Ruth Nash, a senior vice president of a shipping company Anja Roennfeldt, a science educator Alexandra Schindel, a zoologist/community engagement coordinator who has trained sea lions Sasha Francis, a Galapagos-based marine biologist who saves turtles Daniela Alarcon Ruales, a luxury travel advisor for TravelEdge Marion Huiberts, and the founder of EcoWatch who consults on pro-environment marketing activities for clients Stefanie Penn Spear.

These women are silent heroes – quietly cleaning up beaches, upcycling garbage into art, educating students, protecting animals, and finding solutions against the harm plastic does on the environment, human health and marine mammals.

I asked all these women this question: Why do you think an all-women research mission for the plastic problem is important? Why is this not sexist?

Women are underrepresented in science and sailing. But underrepresentation doesn’t mean we are not drawn to these activities or fields. It means that we sometimes have experiences in them that seem unaccepting, harsh, or even hostile. An all-women science research sailing expedition provides women opportunities to engage in sailing and developing creative solutions to the plastic problem in a supportive environment.

Here we could try out ideas and activities that were outside of some of our comfort zones. We learned from and alongside each other. And we never had a man re-explain our ideas or show us how to do something his way—which happens much too often in our daily lives already. On the sailboat, we were often hot and sweaty and wore only our swimwear or our lightest clothing. As women, we could dress, act, smell, and joke with one another in supported spaces and without apologizing for our awesomeness.

Many women onboard work in fields dominated by men. Sailing with an all-women crew meant we could engage with other focused, driven, successful women and develop a comradery with each other that is unique to women. We live in a world dominated by patriarchy, so removing ourselves from a patriarchal society (even just temporarily) provided us with a brilliant chance to flourish and re-envision our roles and women’s roles related to the plastics problem as a separate, distinct, and significant community.

The plastic problem impacts the female body more than the male. To create awareness and underline the topic in general, it just makes sense to do an all-women research mission. On top of that, an all-female crew is still an exception and raises attention naturally.

I have never seen men feel sexist if they participate in all men events. So, no, this is not sexist. Additionally, women are under presented in science and other STEM professions as well as in operations (logistic sector/ocean freight). Also, this particular objective was supposed to be addressed.

Because there is a gap in this matter. Until today we have a small number of publications about the effect in women health of plastics and toxins coming from plastics. It was time for us to go out and to research it for ourselves – This is an initiative from women for women. On top of it, we lack female representation on STEM careers and the eXXpedition Round the World is important to bring additional 300 role models that can inspire and attract more women to this filed. 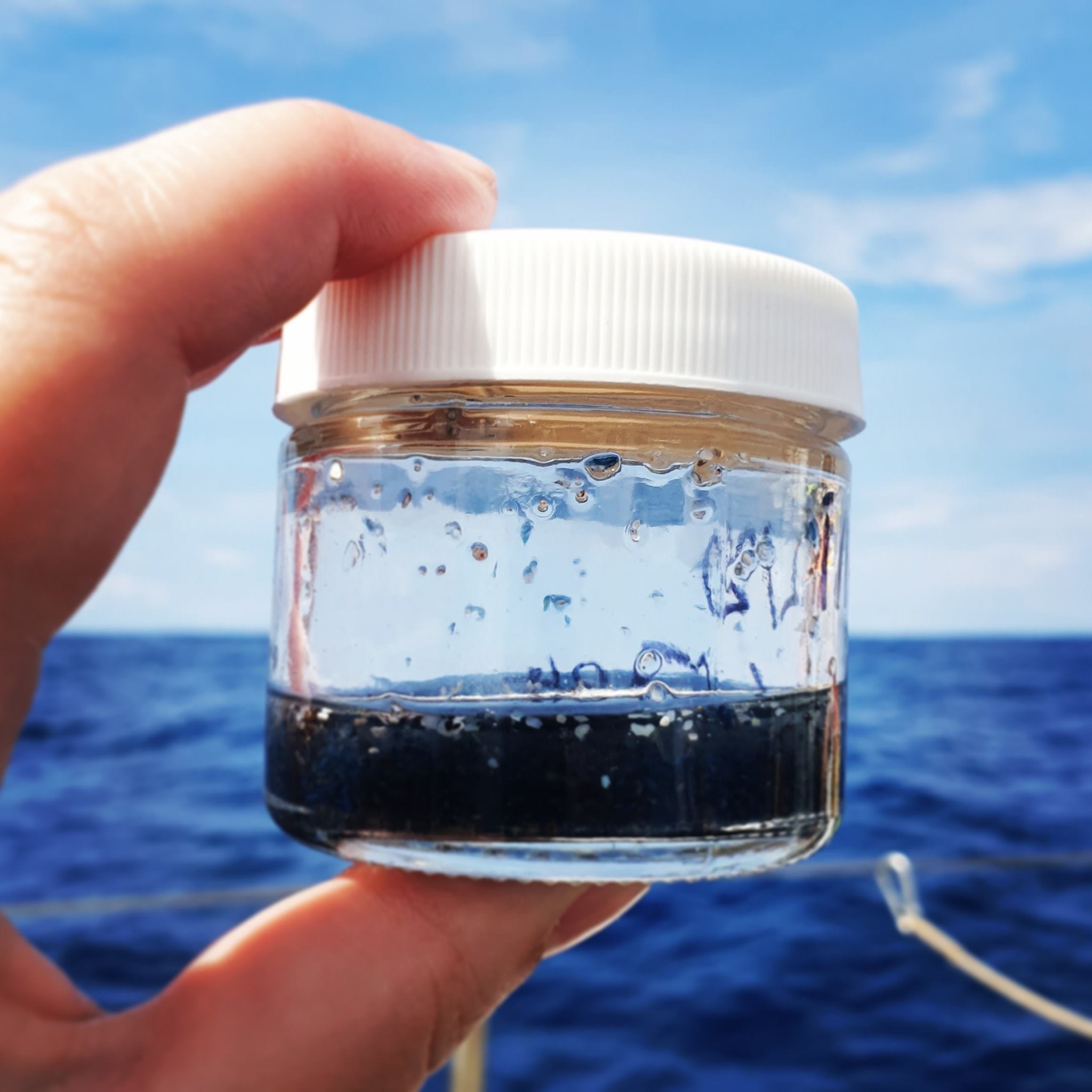 Women are massively underrepresented in research, science, sailing, adventure and pretty much every aspect of the eXXpedition mission. In addition, the plastic problem is of particular relevance to women’s health (see next question!).

The eXXpedition project gives women opportunities they might otherwise never have, highlights women’s roles in vital fields, and gives girls and women much-needed role models. That some people could somehow find this sexist in a world where women face problems every day that middle-class white men can’t begin to imagine is, frankly, just another example of the patriarchy in action.

Sexist is what Nobel Prize winner Tim Hunt said about ‘girls’ in science – He has since resigned from his post at UCL. But enough about him.

The solutions to the plastic problem will come from many areas (politics, education, communication) but key to this is scientific research. Policymakers and legislators will only respond to hard, evidence-based data.

I think the bigger question here is ‘why not all women?’. If I said the names Galileo, Newton, Watson & Crick, Alexander Fleming, Einstein, Thomas Edison to you… you’d know exactly who I meant and what the focus of their work was.

If I said the names Marie Curie, Rosalind Franklin, Dorothy Vaughan, Jocelyn Bell Burnell, Rebecca Lee Crumpler, Dervilla MX Donnelly, you’d probably have to Google most, if not all of them. This is because for too long great women’s names have been excluded or erased from the scientific history books, their work often misappropriated by men wishing to take the credit.

Yet these, and many more, women made incredibly significant contributions to science and society over the years. It’s time that we shouted about this, and the great work that women are still doing in STEM careers today.

Statistical research undertaken by STEM Women has revealed that whilst overall the proportion of female graduates with core STEM degrees is steadily increasing, women still only make up 22% of the STEM workforce in the UK, (and according to the UN, less than 30% worldwide). Specifically, computer science, technology and engineering show the greatest gender gap. More work needs to be done to encourage more women and girls to pursue these subjects and to take up these careers in the workforce, and I believe eXXpedition has this at its heart.

In my own work, if a patient tells me they’ve been to see a specialist (orthopaedic surgeon, consultant neurologist, interventional radiologist) my habit is to ask “what did she advise you?”, “did she offer you treatment?” etc., because we need to make the feminine pronoun synonymous with medicine, science and technology. Other professions too, plumbing, carpentry, policing and the law, architecture, community leaders. We need to create ‘herstory’!

Firstly, it’s important to create opportunities for anyone to research solutions to problems harming humanity and earth. Secondly, creating a positive mission that encourages women to pursue science is fantastic.

In America, 50% of medical school applicants are women but 30% of researchers globally are women (according to UNESCO). In America, where there is a great opportunity for women scientists and doctors, the senior positions are being taken up by men *16% of Deans are Female, 15% of Department Chairs are Female, and 21% of Full-Time Professors are Female. This could be attributed to childbirth and a woman’s choice to be the main child carer.

In a Scientific American article written in April 2018, it states “One of these leading female scientists is Ann Mullally, an assistant professor of medicine at Harvard Medical School. Mullally leads a research laboratory at Brigham and Women’s Hospital, where her team investigates the biology and treatment of blood cancers. When asked about obstacles women face in science she says: “I think unconscious bias is an issue in a field where there is substantial gender disparity at the top, and that group holds decision-making power.”

“In academic medicine, significant gender inequity exists in the recruitment, promotion and retention of female faculty despite the fact that roughly equal numbers of men and women have been entering medical school for well over a decade now, so clearly obstacles exist,” says Mullally.

She says that a major challenge is that the male-dominated field can be unfavourable for women to be promoted.

Her solution? “We have to do more to actively promote women’s roles in science, such as including them in leadership positions, giving them opportunities for seminars and talks at conferences, and providing more community support.

The definition of Sexism in the Cambridge diction is: (actions based on) the belief that the members of one sex are less intelligent, able, skilful, etc. than the members of the other sex, especially that women are less able than men.

Do I think it’s sexist? If sexism is defined as per the Cambridge dictionary definition above, no because I don’t think this mission is to infer that members of one sex are less intelligent or able. If sexism is defined as simply discriminating against a sex, not to downplay or belittle the other sex, but to promote one gender group – then yes, I do because of course it is promoting one gender group and not allowing another gender to participate.