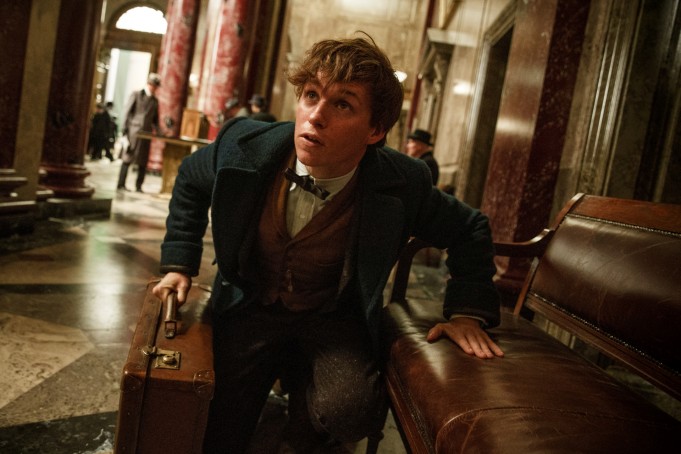 With J.K. Rowling stepping back into the magical limelight not just as the wizarding world creator but first-time screenwriter for Fantastic Beasts and Where To Find Them she has recreated everything that is much loved from the pages of the magical and charming Harry Potter.

The quirky yet timid Newt arrives in New York with his battered brown case full of fantastic beasts in a quest to release the Thunderbird into its rightful habitat. At the same time, New York is under threat from an unknown force which is causing destruction all over the city which is being investigated by the Magical Security of the Macusa Director Percival Graves (Colin Farrell). Thanks to Newt’s encounter with Jacob and a case mix up Newt becomes involved in the hunt.

The ownership and release of magical beasts is illegal in America, so to avoid a possible death penalty, with the help of a dogged Tina (Katherine Waterston) – a witch who works for Macusa who was demoted for the use of unauthorised magic to a boring desk job – and her vivacious sister Queenie (Alison Sudol) help Newt and Jacob escape and help solve the mysterious case with a few detours on the way.

Rich in CGI graphics, which is wondrously supernatural and magical on the eye and a New York which is dark and ominous, Fantastic Beasts is full of astounding entertainment and faithful to the Potter franchise, exactly what you would expect from the pen of Rowling. However, the narrative can seem extremely clunky and at times unintelligible as we dart in and out of scenes which appear messy in its pacing, much like being stuck on a bus where the driver is recklessly speeding up one moment to hit the brakes suddenly making you jolt and proceeding at a snail’s pace.  You would hope to bring on board director David Yates, who directed the final four Potter films, everything would run as smoothly but there is an air of anxiety about the whole picture in whether they can carry off the story as successfully as its predecessor (s).

Fantastic Beasts are plenty in the first of a planned five film series and a handful of these adorable yet pesky little beasts have escaped onto the streets of 1920’s New York – a set recreated in Watford. It’s hard not to instantly fall in love with the Niffler – a cheeky little chap with a keen eye on anything shiny preferable money and gold – it’s this lovable little rogue who is responsible for Newt Scamander’s (Eddie Redmayne) – a world travelling Magiczoologist – encounter with resident no-maj, or what us British call muggle, Jacob Kowalski (played by Dan Fogler) – a simple man who just wants to follow in the family footsteps and open up his own bakery – who, out of the main cast, comes out on top with his well-executed comic timing and portrayal of a hapless, bumbling man who just seems to tag along for the ride. Redmayne brings his English charm to Scamander, perfectly cast as a dippy but brilliant wizard, Redmayne is made for this role. Along with Newts magical beasts, it’s Redmayne’s and Fogler’s film and even with a cast of actors that include Samantha Morton, Jon Voight and Carmen Ejogo they disappear into insignificance.

Whilst Rowling’s Fantastic Beasts is everything any Potter fan would love, entertaining, enchanting and simply magical and a sneak peak at a forthcoming character, it has its glaring flaws which are just slightly jarring. Let’s just hope she picks up her magic wand and conjures up a spell to make its sequel as magical as we know it can be.

Fantastic Beasts and Where To Find Them hits cinemas November 18th.