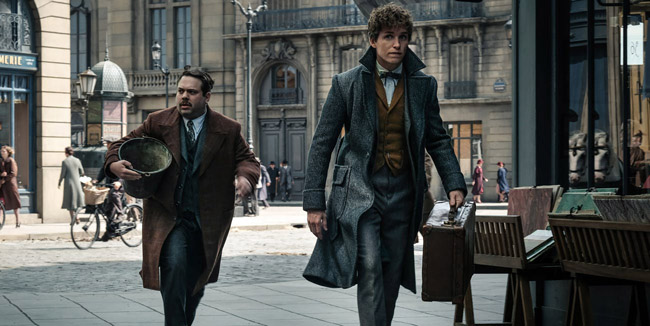 J.K. Rowling returns to her ‘magical’ world of Fantastic Beasts and Wizards with David Yates at the helm for the second film in the five-part franchise flamed in a vortex of scene building and explanation but not much action. We have to call for a deduction of house points for this wizarding episode.

Trying to wade through the muddy swamp of the second instalment of Magiczoologist Newt Scamander’s (Eddie Redmayne) latest adventure it’s hard to pinpoint exactly what or where the film is supposed to be leading the audience. It’s less the Crimes of the blond-haired, wretched Johnny Depp’s Gellert Grindelwald but more a quest of getting his hands on Ezra Miller’s Credence Barebone piled high with flashback sequences that overload an already convoluted plot.

The film opens with a hope of that mystical magic, Rowling established in the Harry Potter films. A daring shape-shifting prison escape by Grindelwald as he commandeers a flying coach across the gloomy grey skies as he is being moved before we switch to a particularly redundant Newt. After the mishaps of the first adventure, Newt has been banned from travelling by the ministry of magic – made even harder to accept by the fact his own brother, Theseus (Callum Turner) is part of that decision – but as Newt isn’t one to follow orders he defies the ban to follow his heart to find Tina (Katherine Waterston) in Paris and to complete the task set by Jude Law’s younger Albus Dumbledore, of stopping Grindelwald in his tracks to control the Muggle world at the hands of purebloods and his desire to take Credence under his control with his secrets.

Thrown in along the way, numerous flashbacks fill the screen for near enough every main character to establish their childhood links including the Scamander’s friendship with a misunderstood Leta Lestrange (Zoe Kravitz), Dumbledore’s relationship with Grindelwald and Credence’s ambiguous past. This episode is very much about setting the history of the Potterverse and not so much about the titular Fantastic Beasts or even its central character, Newt. The Beasts are few and far between except for the ever adorable Niffler’s and the introduction of a Dragon. As for Redmayne’s Newt, he disappears into insignificance as he navigates the streets of Paris on his quest.

The big question comes when the incomprehensibly devilishly handsome Dumbledore’s past with Grindelwald is played out. The best of friends, blood brothers or was there something more to this tempestuous relationship? It would appear that Rowling has tried to combat the backlash regarding Dumbledore’s lack of homosexual storylines with a mere suggestion that these two, were, in fact, once teenage lovers.

It does have its visual wonder to transport it’s not-so-dumb audience to a darker 1920’s world but the uneventful plot and overstuffed exposition and its lack of wit is a crime against this once magical wizarding world. It’s almost like Rowling and co don’t expect audiences to know what’s going on if they kept it simple. Instead, their overzealous need for detail just confuses the outcome into a pile of mess. This is a Bogart we hope they can stupefy in the next instalment.

Fantastic Beasts: The Crimes of Grindelwald is out now.