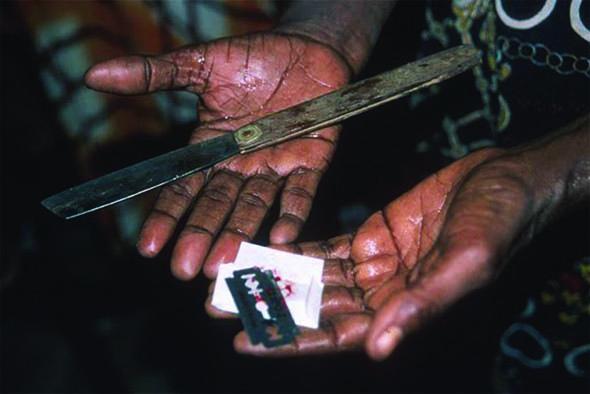 A six year old girl is given a new dress, told to get ready for an adventure. She’s filled with excitement about what lays in store. A special treat perhaps?

In most places in the world this would mean maybe a trip to the zoo or an ice cream treat. But in some parts of the world this invitation has much harsher undertones.

The young girl does not have a treat in store for her. She is going to be mutilated.

Female Genital Mutilation (FGM- also known as female circumcision/cutting) involves partial or total removal of female clitoris, and surrounding genital tissue. It is classified into four types; type 3 is the most mutilating and involves total removal of the clitoris, labia and a narrowing of the whole vagina. FGM is a common practice in 28 African countries, including Somalia, Sudan and Nigeria, as well as some Middle Eastern and Asian countries such as Malaysia and Yemen. It is generally considered to be an essential rite of passage to suppress sexual pleasure, prevent promiscuity and to preserve girls’ purity and cleanliness, and is necessary for marriage in many communities even today. Some Muslim countries have claimed the Quran calls for it. It Can Happen To Anyone
Waris Dirie is a former supermodel who rose to fame in the late 80’s and early 90’s. She featured in Pirelli calendars, worked for Chanel and stormed the runways of New York, London and Paris. But in 1997 the beautiful model who is of Sudanese decent, revealed to the world that she was a victim of FGM and started campaigning for its eradication.

Waris spoke to Flavour Magazine about her experience ‘Mama tied a blindfold over my eyes. The next thing I felt my flesh was being cut away, I heard a blade sawing back and forth between my skin. The pain between my legs was so intense I wished I would die. It is the worst thing you can do to a woman. It just felt like a terrible nightmare when it was happening to me. I always knew that one day I would campaign and make sure the world knew that it existed and that it should be stopped.’

Waris was only 3 years old when this happened. Now a UN Special Ambassador for the Elimination of FGM she helps to fight against the procedure. And in 2002, she founded the Waris Dirie Foundation to raise awareness on the dangers of the practice. Most recently she established the PPR Foundation for Women’s Dignity and Rights’, an organization she founded alongside French tycoon Francois- Henri Pinault and his wife Salma Hayek.

Salimata Badji- Knight is another anti- FGM campaigner. Originally from Senegal, she now lives in Dorset. Here she explains what happened to her. ‘I was five when the women from my village said we were going into the forest. There was a whole group of us girls aged between five and 16; we were happy because we thought we were going for a picnic. But it wasn’t a picnic. Even more than the pain and the crying, I remember the shock of realising that they’d tricked us. I knew they had cut something from me, but I didn’t know what. The women were kind in their way, giving us sweets and nice food; it was their way of asking for forgiveness. But it was also their way of seeking revenge – repeating a crime that had been done to them.’

The most common age for the procedure is between eight and 11 but it can be carried out just after birth or just before marriage. It carries the risk of death from bleeding or tetanus, and long-term problems include urinary incontinence, recurrent infections and chronic pain. Reversal procedures are sometimes necessary in order to avoid complications during childbirth. ‘I worry that I will not be able to have children,’ confessed Salimata to us. And she is not alone with that fear. Infections following on from the procedure can lead to infertility. So women can be robbed of their right to a happy sex life and their right to have children.

Not Just Another Country’s Problem
Every year hundreds of British school girls of Middle Eastern or African heritage face the horror of being taken back home and having the practice carried out on them. Often during the summer or Christmas holidays. An estimated 70,000 women living in the UK have undergone FGM, and 20,000 girls remain at risk, according to the leading UK anti FGM charity Forward.

There has been legislation in place since 2003 (The Female Genital Mutilation Act) in the UK but there has never been a conviction and this hasn’t stopped the practice from happening to young women who are British citizens.

Waris Dirie is outraged by the fact that this can happen in the Western world ‘100’s of youngsters living in Western countries are taken back home for the procedure to be done every year. Unfortunately, people are really ignorant. Politicians and most of the NGOs do not do enough to stop that crime. Their efforts are ridiculous. And just black girls are affected by that. If one white girl would become a victim of FGM, the practice would be stopped immediately.’

And Salimata was shocked to discover that the practice happens in Paris. ‘My family moved from Senegal to Paris when I was a child. I was horrified to see Senegalese girls being told they were going on holiday to Africa, when in fact they were being taken back to be circumcised. For my mother it was a normal part of her culture, and in Paris she secretly had three of my younger sisters circumcised.’

Finding A Solution
Eradicating this epidemic will never be easy. There is no quick solution. Women have been suffering from this unbearable infringement upon their human right for hundreds of years and an issue such as this will never be halted easily.

The UK charity Forward works to help train professionals- teachers, the police and medical profession- on how to handle FGM cases with care and the correct level of sensitivity. Education is definitely key to solving the problem, be it for professionals such as teachers or at a grass roots level.

Salimata told us how explaining how horrific the practice was to her father saved other girls from facing the same terror ‘Before my father died ten years ago, I was able to have a good talk with him. I opened my heart to him and explained how female circumcision could affect you physically and mentally. He cried and said that no woman had ever explained the suffering to him. Then he apologised and asked for forgiveness. The next day he called my relatives in Senegal and told them to stop the practice. As a result, a meeting was cancelled and 50 girls were saved.’ Steps like this go a long way. We appeal to Flavour readers to join in the efforts to help eradicate FGM for good.

The four types of FGM*
1. The removal of the tip of the clitoris;

2. Total removal of the clitoris and surrounding labia;

3. The removal of the clitoris and labia and the sewing up of the vagina, leaving only a small opening for urine and menstrual blood – a process known as infibulations.

4. Unknown- the are various other types which are unspecified. They can include ripping the vagina, burning genitals or piercing the clitoris.

* According to the World Health Organisation, 3 million girls under the age of 15 undergo the procedure each year. Up to 140 million women and girls are believed to have undergone the procedure.

Waris Dirie’s 1998 autobiography Dessert Flower is available from all good book stores. The bestseller was turned into a movie in 2009.