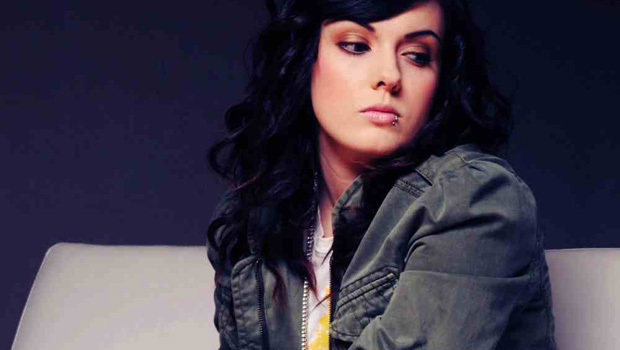 Abby Power is a female rapper of Irish descent. Abby was never a fan of boy bands growing up, instead she was heavily influenced by 90’s Hip-hop stars such as Eminem, Ice Cube, Dr Dre and Missy Elliott. We caught up with the 19yr old  artist to discuss her single ‘Clockwork’, her dream collaboration and why she feels female rappers aren’t taken as seriously as they should be.

You’re heavily influenced by the 90’s era; do you believe hip-hop was better back then?

I believe there was a lot more passion in the 90’s. Being able to have the ability to tell your story through music was a big deal, now it seems like anyone thinks they can pick up a microphone and call themselves a rapper. There’s more to hip hop than just the lyrics, it’s a lifestyle and a culture. It brought people together in the 90’s, now it just seems to tear people apart due to inflated egos!

When did you realise that hip-hop was your passion?

Well I’ve always been into hip hop as a listener, growing up with older siblings it was something I was exposed to. Also it helped growing up in the era where MTV actually showed music videos and not just reality TV shows about teenage pregnancies and people partying for a living!  But I started making my own hip hop in 2010. It started off with me writing Def Jam style poetry after being influenced by Shihan the poet! Then when someone suggested I tried turning them into lyrics, I went for it, and here I am!

Describe yourself in three words? Did you write Clockwork with a specific person in mind?

Haha! I knew this question would appear somewhere at some point, yes it was indeed written with someone in mind, but I don’t kiss and tell!

What has the feedback been on the track so far?

I don’t think I’ve received any negative feedback from it at all yet, which is great! A lot of people were surprised to see me do this style of song, but they loved it, and it just shows my versatility. The fact I can go from deep alchemy style lyrics to a let’s say ‘love’ themed song means I can reach out to different crowds and expand my fan base!

Which UK artists would you like to work with?

I’d love to work with Delilah! That would definitely be my dream collaboration! Her voice is fantastic and her song writing skills are on point! Rapper wise, I’ve had my eye on a battle rapper called Shotty Horrah, he’s got serious skills and I imagine a studio session with him would be far from boring!

Avril Lavigne is one of your favourite artists, what do you like about her music?

Well, I started listening to her when I was about 8 years old, and at the time my Dad had cancer so I’d listen to her music to help me keep my mind off of it and help me cope with it all. A lot of people only know her for ‘Sk8er boy’ type songs but reality is, she is a very talented songwriter and musician when she isn’t jumping around smashing her guitars into car windows! (My Dad recovered by the way, in case you thought, well, you know)

What does your mum think about you pursuing your music career?

My mum honestly thinks it’s great, I think it worries her a bit that I’m perusing a career that doesn’t have a guaranteed future, but she is very supportive of it all, as is the rest of the family. However, she does prefer when I sing because she’s Irish and rapping isn’t a big thing over there!

How did your signing to Vintage State Music come about?

Well I had a photo shoot with their partnering company Denaro, and the managing director was very interested in working with me, so when Vintage State was formed I was the first artist they approached, and well, things developed from there.

Tell us a bit about your new mixtape?

Well, I don’t have a new mixtape, I have a new album coming out that is actually a joint project with my producer and best mate Peter Geary (producer of Clockwork), it’s very different from any of my other material. Not to degrade the term ‘rapper’ but I’ve always preferred the term ‘artist’ and hopefully this CD will put me in that category! I can’t reveal too much about it right now, but hopefully it will be released on iTunes in the summer.

Why do you think it’s harder for female rappers in the industry, especially in the UK?

I think it’s harder because we’re not taken as seriously as men are. A lot of men still seem to have this “rapping is a man’s game” mentality and that kind of ignorance is what holds us back. Women are still seen as something that has to be ‘sexy’ and only something to be looked at. Granted artists such as Nicki Minaj don’t help with this theory, but hopefully an artist like me will break that mould.

Did you ever consider going on X-Factor or The Voice?

I wouldn’t go on a talent show because past records have shown that rap and talent shows don’t go hand in hand. It seems like the people who run these shows already know what they want us to find impressive, rap isn’t one of them. I prefer to put the work in, and make my own name.

Who is your celebrity crush?

Leonardo DiCaprio has always been one, he may be kind of old now, but he’s still got it! Also I’m a big Tom Hardy fan. I feel odd answering this question, how did you get me to answer this?  Haha

If you were an animal, what animal would you be and why?

I’d be a White Tiger because they’re rare and very hard to come by.

When was the last time you apologised to someone?

Not someone, but something! I accidentally stood on my dog’s foot and apologised to her…that’s right, I talk to my dog!

What have you got coming up in the near future?

Well I have this joint cd coming out soon; I’m also going to be working on another project as soon as this one is finished! So I’m definitely keeping myself busy. I feel 2013 is going to be a very productive year for me so expect to get a lot of material, and see a lot of new visuals. I’ll also be doing a few overseas collaborations so look out for those as well!