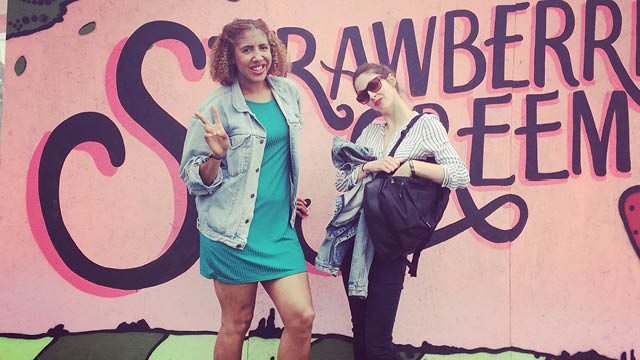 Strawberries & Creem was a petite looking festival, one that was small in structure but huge in passion and personality. Arriving in Cambridge I had a good feeling about how the day would pan out, it seemed the whole city was jubilant and heading to Haggis Farm, on what had turned out to a marvellously sunny afternoon. On first inspection this festival had the appearance of a quaint and cute summer fayre, with bunting, giant strawberries and retro bicycles adorning the site but don’t get it twisted- Cambridge knew how to party.  As Jamz Supernova set up the energetic pace for the day, some ticket holders relaxed in hammocks, whilst VIP’s enjoyed rainbow coloured Alize cocktails, massages and Deliveroo goody bags. Tans were topped up at the Anchorage beach club with Ibiza & Croatia feels as people got funky to motown, soul and dance anthems, whilst over in the Strawberry tent garage, funky house and grime rang out from Freerange and Crazy Cousinz.

Going against the grain with a early 2pm slot, Kano mastered a run down of tracks from ‘made in the manor’ assembling mosh pits and creating pistol signs as he delivered ‘garage skank freestyle’ and ‘this is England.’ Man of the moment Kano also included hits from time ago before  Channel 1 slowed the tempo down with their mellow mix of reggae and dub ska. Keeping crowds irie before D Double E came about with his unmistakeable lyrical style.

Urban clothing brand TSCH kitted visitors out in snapbacks that made for a united look, it didn’t matter where you were from or how you were dressed, people were all in support of this majority university run day and it was interesting chatting to so many organisers of the event to see how far it had come in 3 years.

Memorable moments included performances from Nelly who quite simply owned the stage, as the field sang lyrics back to the international rapper, it was surreal that the US star was with his henchmen entourage, on a humble sized stage by the side of the motorway; surreal but astonishing and proud even for a townie who had come for the day to witness a catalogue of hits spanning 10 years.

Chants lead the Euro match of England VS Russia, with a giant screen before a sea of England tops and S&C snapbacks, it couldn’t have been a more unified scene with a music background from Snakehips who had crowds in harmony as they sang along to ‘All my friends.’ Big Narstie worked his fans into a lather, whipping off his t shirt to cool himself down before dropping ‘when the bassline drops’ and new collaboration with duo producers Star.One.

MBE legend David Rodigan was probably an unexpected hit with many as one girl admitted to me she had no idea who he was but thought he was absolutely amazing! His ability to hypnotise audiences with his extensive archive of reggae, dancehall and ska, with shout outs to artist near and departed, alongside a music history lesson… there really isn’t another DJ like him. Compelling people to “give (me) a signal,” rewinding tracks that demanded it and just getting people to hop about without giving a f*ck, the next act had some following to do, especially as they were fashionably late. Kurupt Fm commanded the stage with gusto, opening their set with champagne sprays, inviting the heavens to open but you don’t honestly think that deterred crowds from enjoying the last act of an incredibly lark about day, do you? Combining ukg, dancehall and grime, the sportswear clad geezers had everyone skanking in the rain to the sound like So Solid Crew, well into the car park as some attempted to make their way home. Another festival highlight, those in the know of their BBC 3 credentials relished the set as much as those who had no experienced of the ‘get out the way’ MC’s and DJ’s.

In 2017 I can see Strawberries & Creem setting their sights on a bigger venue space, adding more tents, along with bus shuttle services to accompany their environmentally friendly cycle access. With bigger things to come, I look forward to coming back to the sleepy city for more music and mayhem.