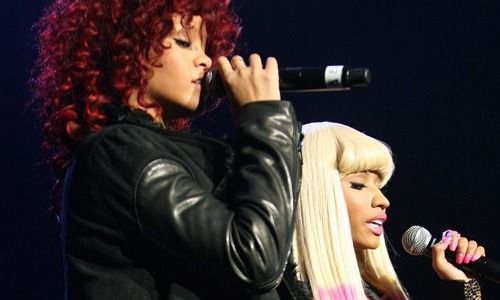 Rumours of conflict between Nicki Minaj and Rihanna first surfaced last month at the MTV Video Music Awards after Nicki allegedly told Rihanna to ‘sit the F**k down’.

The two divas were nominated for the same award but after Nicki won the prize. On her way up to collect her crown Nicki allegedly snubbed Rihanna after she tried to give her a congratulatory hug.

The animosity it seems was no joke as things just moved up a notch. Earlier this week both Nicki and Rihanna unveiled the cover art for their new albums and both publicized a November 19th release date setting the framework for an epic battle between the Rihanna Navy and Nicki’s Barbz

There’s no denying we’re fans of both these sopranos, but has Rihanna run out of album cover ideas?  And as far as Nicki, she reminds us of Chaka Khan, in the late 1970s.

Not to be out done by Rihanna’s eye-catching ‘Unapologetic’, Nicki’s reissue of ‘Pink Friday: Roman Reloaded — The Re-Up’, will undoubtedly be a strong competitor.

However, the decision as to who’ll triumph is in your hands… Team Rihanna or Nicky?