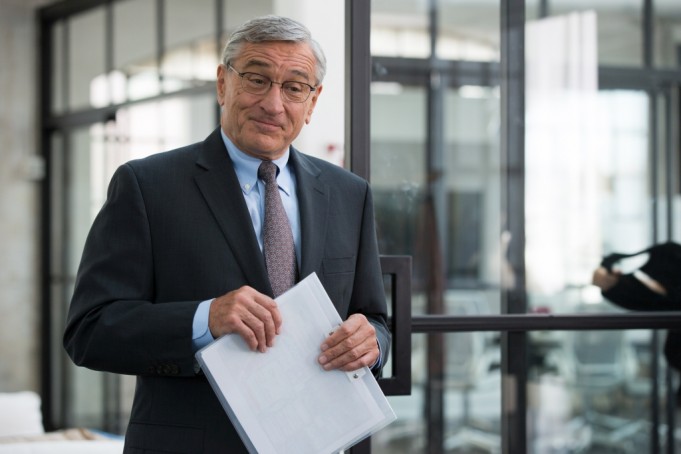 With the release of The intern, starring Anne Hathaway and Robert De Niro in cinemas on the 2nd of October we thought what better time to take a closer look at the career of Robert De Niro, especially with it being his 50th year in film.

De Niro is one of the most loved and greatest actor’s of all time and whose name should be known by everyone. Coming from an Italian Father and Irish mother, De Niro first hit our screens in 1965 in Three Rooms in Manhattan, a film he received no credit for and had a minor part. Over the years, De Niro has starred in some absolute classic movies (and some confusing ones we do admit) which should be in everyone’s collection. Let’s take a look at some of his films to date (please note these are in no particular order).

Directed by Martin Scorsese, Raging Bull see’s De Niro playing boxer, Jake La Motta, alongside Joe Pesci as his brother Joey.  The story is a spellbinding and violent look at the life of real-life boxer, La Motta, whose fists and temper may have propelled his success in the ring but was also the cause of his demise outside it. It’s a very human tale of how one man’s success can lead him on a self-destructive path.  De Niro’s impeccable and totally mesmerizing performance in Raging Bull saw him win an Oscar for Best Actor.

Over the years De Niro and Scorsese worked together on numerous films, in Taxi Driver they teamed up again to see De Niro play the role of Travis Bickle, a mentally unstable Vietnam War veteran who works as a Taxi Driver on the streets of New York.  This film is depressing, and extremely unsettling for the viewer as we are taken on a journey of obsession and violence and portrays much of what the country was like in that time. Taxi Driver earned itself four Academy Award nominations.

De Niro yet again partners with Scorsese and also reunites with Raging Bull and Once Upon a Time co- star Joe Pesci as Jimmy Conway in Goodfella’s. A story based on the life of Henry Hill, a one-time mobster who turned grass in order to save his own drug taking/dealing neck. For years, audiences have been enthralled with gangster films and Goodfella’s was no different as it takes you on a journey of the glamour and not so glamorous side of the gangster life. The film also had a cast of impeccable actors in the form of Ray Liotta and Samuel L. Jackson.

For once we don’t actually see De Niro in your tough guy gangster role in A Bronx Tale. De Niro plays Lorenzo, the father of a young boy who is enticed into the world of the seedy and unsavoury gangster Sonny. De Niro actually made his directorial debut with A Bronx Tale and he did an outstanding job. Unfortunately, at the time, it wasn’t that much of a success at the box office but this is certainly one of those little gems which just shows how much talent this man has, not just in front of the camera but behind it too.

After The Godfather became an instant hit (and all time classic) in 1972, it was only right to make a sequel. This is one sequel that was worth making and equalled the quality of the first film with its own emotional journey’s and extremely intimate moments. De Niro starred as a younger version of Vito Corleone in this classic and it saw him win an Oscar for Best Supporting Actor.

Even though over the years De Niro has been drawn to those tough guy roles, he’s actually proved time and again he can take on those funnier roles and deliver better than you would ever expect.  Here De Niro plays the very straight-laced Jack Byrnes, an over protective but well-meaning retired CIA analyst. How he manages to keep a straight face in some of these highly inappropriate scenes is just pure genius.

At the age of 72, De Niro just proves in The Intern he has no intention of slowing down, and that not only the comedy route but a softer more gentle approach in the roles he plays he can excel at time and again. De Niro takes on the role of retired Ben Whittaker who misses being at work surrounded by people and feeling his life has a purpose. He applies and gets a job as a senior intern at an online fashion company and instantly becomes a hit with everyone but the boss, Jules (Anne Hathaway). Slowly but surely, winning her over with his loyalty and guidance and in the process building an intimate relationship.

(Disclaimer: Because De Niro has made so many good films we had to pluck for just a few, there were just too many to list here.)

The Intern is in cinemas October 2.

Related Article: The Intern Review – A heartfelt and gentle comedy which will leave you dealing with a number of emotions.