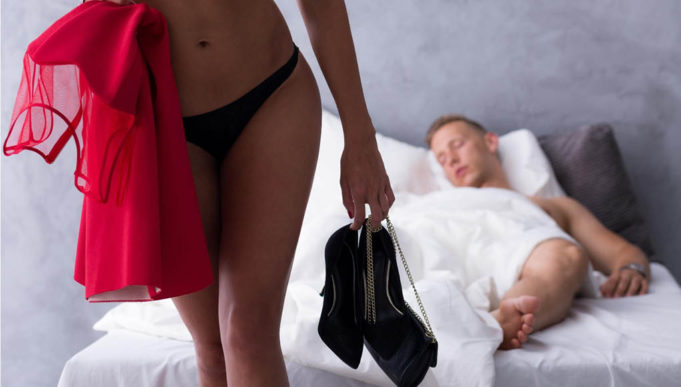 One-night stands are a favourite activity for those going on summer vacations – warm nights, few clothes and it’s time for all that working out in the gym to pay off. A recent study has revealed the nations where women prefer have one-night stands while on summer holidays and those who prefer to sleep around in their home countries.

The survey, conducted by VictoriaMilan – a dating website for married and attached people looking to have an affair – asked 6,758 of its active female members how to best create a summertime solution for people looking for sexual encounters with no strings attached. Women from 15 countries who regularly have one-night stands with sexy strangers and those who have one-night stands during summer holidays have been identified.

More than one-third (33.7%) of Swedish women are jumping in the sack with strangers while they take a summer break, and just over a quarter (26.6%) claim they take sexy strangers to bed at least once per month.

A massive 37.9% of Norwegian women say they regularly slip between the sheets with a random person as often as they can – at least once per month. Norwegian ladies love no strings attached sex with strangers while on holidays in summer, and just over a third (33.3%) will have a one-night stand while they’re away from home.

Just under one-third of Danish women (32.1%) say they’ll indulge themselves in a little summer holiday sexiness and have a one-night stand while away. They enjoy having one-night stands regularly while they’re at home too, with 32.7% say they regularly take strangers to bed for one night of passion.

Spanish senoritas think in a similar way – 36.6% prefer to choose sexy strangers from their hometowns and local areas to take to bed, while 27.3% prefer to take a lover while they are away from home and in hotel room sheets.

Irish women keep their one-night stands close to home usually, with 34.5% saying the prefer to get naked with someone they find nearby, and only 26.6% say they will have a one night stand just once a year while on summer holiday.

Ladies from the USA also feel more comfortable regularly having one-night stands while at home (33.8%) and just over one-quarter (26.5%) will bring their away game on summer vacation with them as they indulge in one-night stands just once a year.

More than one-quarter of women from Italy (26.3%) say they only partake in steamy one-night stands once a year while they are on holiday. When it comes to regular life in their hometowns, 23.4% say they have one-night stands approximately once per month.

It’s no surprise that passionate French women love to indulge in one-night stands in their day to day lives, as 31.3% say they have a one-night stand at least once a month. While on their annual summer holidays, only 25.4% feel the need to shed their bikinis and jump into bed with a stranger.

Swiss women are the least likely to have one-night stands at home with just 19.1% saying they regularly have a night of passion with someone they don’t know. They’re must more likely to let their hair down when they go on their summer holidays, with 24.4% saying they’ll make love with a stranger for one night.

Nearly a third of Polish women (28.3%) say they like to have one-night stands locally and regularly – approximately once per month, while only 22.4% say they will get wild once a year while on their summer holidays.

A third of Belgian women (30.9%) let their sexy side play around having regular one-night stands while they’re in familiar home territory. While they’re on summer holidays, they are the least likely women to get intimately involved with a stranger, with only 19.1% saying they’ll indulge while on summer holidays.

Founder and CEO of Victoria Milan, Sigurd Vedal, said that while sexy and adventurous, one-night stands could be considered a waste of time for people looking for ongoing sex with no strings attached.

“Why meet someone and sleep with them just once, when you can find someone with the same priorities as you: a desire for great sex with the understanding there’ll be no fuss afterwards as you both have responsibilities and lives of your own.

“Being able to meet like-minded adults for no strings sex is perfect for people with busy lifestyles who want or who are away on their summer vacations. Our research even identifies which countries to holiday in to have one-night stands. But if you’re looking for two-night, three-night or ongoing sex without the hassle of a relationship, it’s time to join Victoria Milan,” Mr Vedal said.