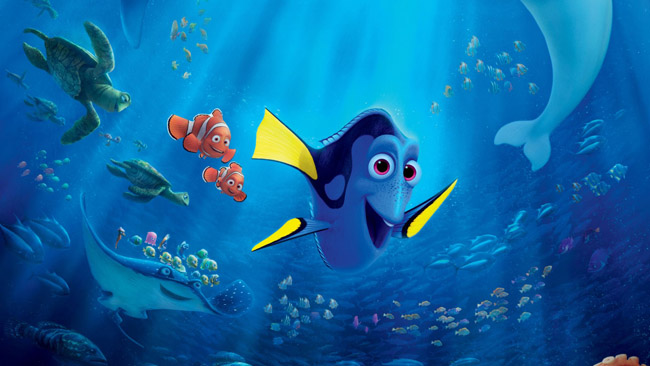 13 years after the huge box office success back in 2003 of Finding Nemo comes it’s adorable and message driven sequel in the form of the that lovable forgetful fish Dory, in Finding Dory. Filled with delightful cuteness and lashings of laughter Pixar, have yet again, hit the animation jackpot.

Even though the base storyline doesn’t venture further than Finding Nemo, where we saw Marlin, with the aid of his oceanic friends including Dory, travel the sea’s to find his lost son Nemo. Finding Dory, who is voiced again by Ellen DeGeneres, and her extremely short memory span embark on a journey to find her long-lost parents. It still has that underlying message of ‘you can do anything if you believe in yourself’ but it’s subtle and could be missed by the audience it is aimed for. Written and co-directed by Andrew Stanton, who was responsible for bringing us John Carter, which in no way speaks against this film, immediately starting the film with the cuteness factor with a baby Dory and her parents. Before too long we are propelled into the present day and a grown up Dory with her best friend Marlin. Dory is still tremendously forgetful to the frustrations of Marlin; small instances jog her memory of her past which is portrayed through flashbacks. Dory sets out on an almost impossible task of finding her parents after so many lost years.

Along the way, not letting her inability to remember things long term hinder her, she meets a few new and old friends. The one thing that Pixar nails on the head every single time is how perfectly they match up the voice-cast with their characters. Idris Elba and Dominic West are the voices behind a couple of silly seals, graced with laugh out loud comedy moments. In addition to this, we have old friends of Dory’s in the form of a self-doubting Beluga Whale and a practical blind whale shark, voiced by Kaitlin Olson and Ty Burrell, who will do anything to help Dory. Most importantly we have Ed O’Neill as the voice of Hank, a grumpy seven-legged octopus who helps Dory for his own selfish reasons. He probably has the best comic one liner’s and deep down has an overwhelming fondness for our lovable Dory. The one thing of note from Finding Dory that the storyline is incredibly weak, however, it’s character development and it’s humour is so strong that it carries you through like a smooth ride on a timid wave.  It may not match up to the greatness of Finding Nemo but this sequel gives it a bloody good try and doesn’t fail to inspire.

Finding Dory is out in UK cinemas July 29.