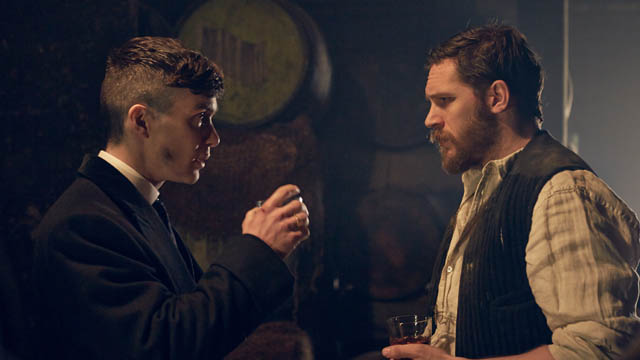 Watch the Season 1 recap of Peaky Blinders, before you delve into season 2 which starts TODAY (Thursday Oct 2nd) at 9pm on BBC Two. Hardy will feature as a charismatic leader who presents a unique opportunity to Tommy Shelby (Cillian Murphy). The move reunites Tom Hardy with his Locke writer and director Steven Knight, who created Peaky Blinders and has written all six episodes of the second series.

PEAKY BLINDERS II will air on BBC Two in October. It will see the Shelby family expand their empire as the 1920s begin to roar.

TIME TO MAKE SOME REAL MONEY

As the 1920s begin to roar, business is booming for the Peaky Blinders gang. Shelby starts to expand his legal and illegal operations. He has his sights set firmly on wider horizons, and the race tracks of the South are calling out for new management.

Shelby’s meteoric rise brings him into contact with both the upper echelons of society and astonishing new adversaries from London’s criminal enterprises. All will test him to the core, though in very different ways.

Meanwhile, Shelby’s home turf of Birmingham is beset by new challenges as members of his family react to the upturn in their fortunes, and an enemy from his past returns to the city with plans for a revenge of biblical proportions.

Featuring a spectacular cast that includes Helen McCrory (Harry Potter and the Half-Blood Prince), Noah Taylor (Game of Thrones) and Tom Hardy (The Dark Knight Rises), Peaky Blinders 2 is an enthralling tale of ambition, corruption, violence, desire, and above all an extraordinary family living through extraordinary times.