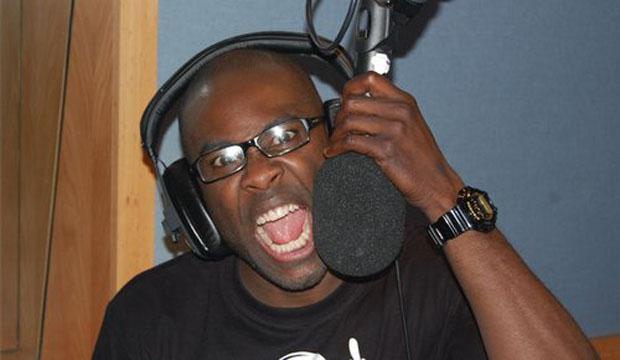 Kojo tells Flavourmag about Live N Kicking, his progression as a comedian and much more!

You’ve seen him on MTV Base with The Fresh Prince Of Hackney, Young Gods Of Comedy and Kojo’s Comedy Fun House. You listen to him every morning on the Choice FM Breakfast show. Now with his first movie role in Noel Clarke’s, The Knot, Kojo returns to Hackney Empire to tape his first ever DVD “Live N Kicking.”

Tell us about Live N Kicking and how it came about?
I think it was something I was ready to do, I was approached by a production company called Revolver about doing some comedy stuff, they’re the ones who put out Anuvahood. They heard about me, we sat down and had some meetings, they came to some shows and thought it was a good time to do it. I’ve been doing this for 11 years so its about time something came out on the shelves.

What can we expect from Live N Kicking?
It will show a lot of progression, a lot things have happened in between the Fresh Prince of Hackney and now, in terms of me going abroad to America, why I went and why I came back. I’m going to be talking about things like the riots. Also talking about a possibility of having a black Prime Minister and what kind of character that person would have to be, for us to really get involved. There’s loads of reasons why a lot of black and urban kids don’t vote, no one really asks that question, they just assume we don’t vote because we have no knowledge of politics. I’m from hackney so I wanted my first ever DVD to be there. Having sold it out twice, it’s a good opportunity to go back and really tackle some of the issues that happened after the riots; and obviously general observations in life and where I’m at now really. Live N Kicking is more of a big statement rather than Kojo’s usual stuff, I’ve got the blessing to have all these people in one room, it’s about using that opportunity.

What do you want the audience to take away from this show?
I want people to see that Kojo’s progressed, I want people to walk out of there and say finally someone said something. This DVDs gonna be all over the place, its gonna be everywhere. Some comedians make people laugh but people remember nothing they’ve said. I’ve never been that comedian, till this day I have people quote me. I want people to come out of there saying they had a good time as well as learn a bit more about me.

What other great and wonderful things do you have planned for the New Year?
I’ve been writing a lot of scripts, I really wanna do a lot more acting next year. The DVD is the main focus right now, I’ve got a role in Noel Clarke’s next movie called The Knot which is out on valentines day. I’ve got a cartoon that I’m working on called The Hoods, which stars Kevin J, Shanika Warren-Markland from 4321, Sabrina from Mystiq, and Arnold Oceng. I’ve got a great animator and we’ve done the pilot script, The Hoods should come out around February/March, next year online.

You’ve sold out shows, you’ve become a radio presenter, you’re releasing your DVD, what other things do you want to accomplish?
This all just started out from wanting to be funny, just from that I’ve been blessed to move on to radio, TV presenting and all these other different things. I think I’m kinda around what I want to do. If I’m young enough to retire, to like be a head of a TV channel, just to kinda get my ideas out there, get a bit of diversity on television.

Jeggings/Leggings?
Hmmm, Not! I just like girls in jeans, I’m not a fan of leggings.

True religions?
It’s definitely a not now, I think its had its time, let it go, find another religion.

Push up bra?
Oooh hell no! (Laughs) They are the biggest lairs on the planet!

Blackberrys?
I was gonna say not, but I’m gonna say hot, for me it allows me to keep in contact with people that I have all over the world, on the whole they can be irritating, but I’ll definitely say hot.

iphone?
I’d say hot, I love the apps on there, but I’m just not a fan of touch screen, I can’t do all of that sliding thing, getting fingerprints on the screen and you can’t even see who’s calling you, it’s not for me, I would say hot though, it is a good phone.

Oyster cards?
Not man, I can’t keep up with that, I still buy travelcards, all that you didn’t tap out here and there, I can’t do all of that stuff.

Open toe shoes?
Ahhhh man, hot hot hot, if you’ve got some nice toes, you can rock them bad boys, and if you don’t have nice toes you need to wear boots all the time.

Choice FM
Oh c’mon, what you tryna do (laughs) definitely hot, I think it’s a whole new energy at Choice FM right now, its gearing to a younger audience than what it had in the past. It’s a new generation, the generation before will always be untouchable because that was legendary radio; but I think everything has to change, and sometimes things have to move into a new direction. Me, Max, Pandora, Abrantee and E-plus, we’re tryna be the new pioneers of this time. We’re trying to do what hasn’t been done before.