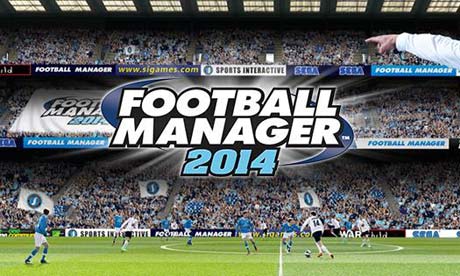 Partners, bosses and teachers all over the country today will be feeling the effect of the release of the worlds most popular sporting manager simulation game – Football Manager 2014! Football Manager is a legacy that many have grown up with and each year the budding Jose Mourinhos and Alex Fergusons of our nation get to work, attempting to take their favourite team to glory!

Addictive, frustrating, rewarding and very much real, the game immerses you into the life of a football manager. Revel in adulation as you take your team of underdogs to League glory or experience the wrath of your over-ambitious Arab owners with more cash than sense as you fail to meet their lofty expectations! Either way once your playing it is is difficult to turn off the laptop! You will begin to promise yourself  ‘just one more game’ a dozen times before it dawns on you that you have to be up for a work or class in a few hours!

I have had some time with the game and as always the guys have made some improvements to last years edition including:

Play it whenever, wherever, however – Play on Linux for the first time and the inclusion of ‘cloud-save’ technology means that managers can now pursue a single career from any computer, anywhere in the world. Tactical overhaul – There has been a complete redesign of how tactics are created, selected and implemented with player roles and team strategies becoming even more prominent.

More realistic transfers and contracts – FM 2014 features a revamped transfer module where opposing clubs and managers adopt a more realistic approach when making or responding to transfer offers. In addition, a number of new ‘real world’ transfer clauses have been added, such as the facility to loan a player back to the club he’s just been bought from and the option to offer a combination of cash and loan players, as well as new contract clauses such as a sub bench appearance fee.

More sophisticated board interaction – Contract negotiations are more realistic in FM 2014, as managers and boards can now make demands and lay down their respective visions for the club in both initial job interviews and contract renewal discussions.

Improved interaction with players, staff and media – There is now better interaction between players, managers, their rivals and the media; for example, members of the coaching staff now offer feedback on how reserve and youth team players are performing. News system – The news system has been overhauled so managers can now deal with many club matters directly from their inbox. In addition, news is now colour-coded, based on category, and contains more detail.

Prior to the launch the guys at Football Manager used their extensive database to finally settle some of Footballs biggest ‘What If’s?!’

The Football Manager team has crunched more than a decade’s worth of FM stats and data and turned its database’s attention to solving some of the greatest ‘what if’ moments from the last 10 years of the beautiful game.

Fans arguing that Man City bought the title, Mourinho should never have been sacked and Gerrard could have a clutch of Premier League winners medals, get the answers they crave courtesy of Football Manager.

What if Arsenal didn’t sell their best players and Van Persie, Fabregas, Adebayor, Nasri, Clichy all stayed?
Despite coming under fire for his transfer policy, it appears Wenger knew more than his detractors. Even with these top players in the side, Arsenal FAIL to win any major trophies and can only achieve consistent third and fourth place finishes.

His best season is 2012/13 when they finish third, keep the tightest defence in the league and score the 2nd highest number of goals. They Reach the FA Cup final in 2011/12 but are beaten by Liverpool.

Van Persie top scores for the club, scoring 32 goals over the three seasons during the simulation.

Despite mixed performances for England, he plays an integral role in the side alongside Lampard in the centre of midfield and together, they are consistently Chelsea’s best players.

During the same period Liverpool is trophy-less without his presence.

‘What If’ José Mourinho had stayed as Chelsea manager?
Put simply, they would have WON more silverware.

Football Manager 2014 is out now in stores and via download – I’m off to put my suit back on and show David Moyes how managing Manchester United should be done! See you all in a couple of months!