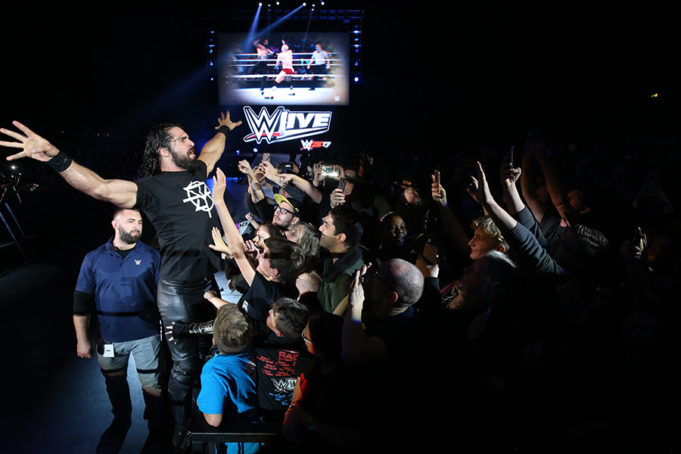 World Wrestling Entertainment rolled into London on Friday night. The action took place in a packed-to-the-rafters Wembley Arena and was attended by a number of celebrities.

Taking time out from their X-Factor rehearsals were 5 After Midnight. It appears the talented boys (Jordan Lee, Nathan Lewis and Kieran Alleyne) are all WWE fans and couldn’t wait to take their seats at ringside.

Following a meet and greet with fans, and charitable appearances with the Make-A-Wish-Foundation, the WWE Superstars took to the ring for an explosive night of action featuring Chris Jericho, Roman Reigns, Sasha Banks, and Universal Champion Kevin Owens – who was left lying in the ring following a show-stopping move that saw him thrown through a table by opponent Seth Rollins.

It’s all part of a huge tour that sees the WWE bodyslamming it’s way through 10 shows, including a TV recording for Smackdown Live, which takes place tonight at the SSE Hydro in Glasgow. From there they head to the Genting Arena in Birmingham tomorrow night, and the tour culminates Thursday evening at the Motorpoint Arena in Cardiff.

WWE’s appeal seemed stronger than ever on Saturday night. Fans flock to the shows from all age groups, race, and gender, which always makes for a tremendous atmosphere come bell time. Wembley Arena was treated to thrilling bouts and entertainment for all the family.

For more information on the remaining dates visit: http://www.ticketmaster.co.uk/WWE-Live-tickets/artist/1848807