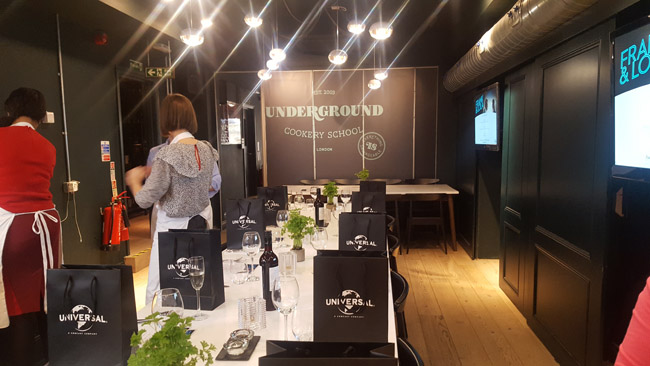 Last night Flavourmag were invited down to the Underground Cookery School to partake in a little cooking class to celebrate the DVD and digital release of Frank & Lola – which is out now for your home entertainment pleasure. Frank and Lola, which stars the extremely underrated Michael Shannon and Imogen Poots is a dark noir story of Love, Obsession, Betrayal and revenge. Frank & Lola is the story of two people locked in a battle of passion and obsession. When talented chef Frank meets aspiring fashion designer Lola, he falls instantly and violently in love. As the secrets of Lola’s dark past are revealed, the lovers are drawn into a web of sex, jealousy and revenge. With outstanding performances from Academy Award® nominee Michael Shannon (Nocturnal Animals) and Imogen Poots (Filth, A Late Quartet), Frank & Lola is a haunting examination of love, obsession and domination that weaves a twisted yet irresistible spell.

Linking in the fact that Frank is a chef, we got the chance to showcase our own culinary skills with the exceptional help of the Underground Cookery Schools own head Chef Martyn Reynolds – who quite frankly had the patience of a saint – Also on hand for the evenings cookery fun was the ever smiling general manager Carlos Ossa Tobon who was adamant in getting us all a little tipsy by constantly topping up our glasses with prosecco, So where did we start? With a starter of Fresh Tagliatelle with Chilli & Truffle Oil Getting our hands busy from the very start we were tasked with making our very own Tagliatelle from scratch – which with a little bit of elbow grease and a whole lot of help from a pasta making device was a lot easier than we expected it to be. Next up, was, of course, our main course which was Breast of Gressingham Duck, Confit Cigar, Celeriac Puree. Thankfully, our only task was to butcher the poor duck. In teams of two, we proceeded to de-wing the bird and hack the two breasts off – Talk about make you work for your dinner. Finally, the third and final dish, Dessert – some would say the best dish – which was a Chocolate Parfait. This had to be the easiest job, if not just a little tricky. Whilst I was tasked with the honour of whipping up the ganache, we also made the chocolate casing. For all those taking part in the lesson, that was our job done, as we sat down to Frank & Lola playing in the background, our lovely teacher and Chef got on with the job at hand to cook up our prepared meal. He certainly did an amazing job, as it was simply sensational.

You can check out the amazing fun events Underground Cookery School has to offer here. Frank & Lola is out now on DVD and Digital Download