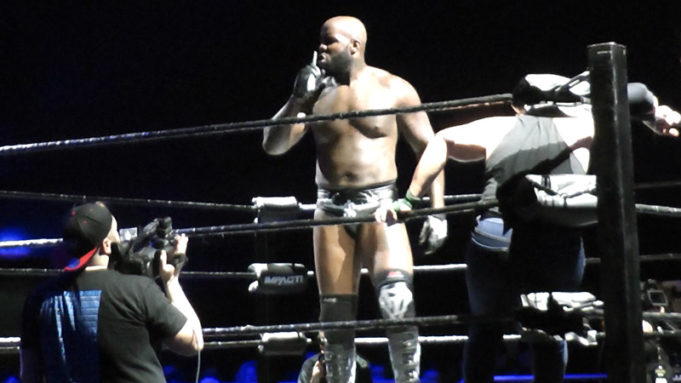 There’s no doubt that pro wrestling has been enjoying a huge resurgence in popularity during the last few months.

Numerous UK promotions have been treating mat fans to some incredible action and British Wrestling is back on ITV. Even WWE has launched its own UK Championship, so it should not come as too much of a surprise that there’s now a convention for dedicated pro wrestling fans. The first ever Wrestling MediaCon took place at Bowlers Exhibition Center in Manchester last weekend and attracted a huge crowd.

Flavourmag were in attendance to witness the larger-than-life action and were granted exclusive time with the management team and talent behind IMPACT Wrestling (which airs on 5 Spike TV, Friday nights) as they prepared for Wrestling MediaCon’s featured show on Sunday 9th September. We quickly uncovered the methodology behind the group’s current business success.

“We are keen to work with our partners at Spike TV and part of that is to bring IMPACT Wrestling back to the fans in the UK” said Ed Nordholm, who is the company President and a respected sports content visionary.

Indeed it has been a little while since IMPACT last toured the UK. They are now owned by Anthem Sports & Entertainment (Anthem also recently launched the FIGHT Network on SKY Channel 455, showing a mixture of combat sports from all over the world.)

Around the time that the group changed ownership in 2017, a number of their top stars signed with WWE, presenting IMPACT with some logistical challenges. With Kurt Angle, AJ Styles, Bobby Lashley and others gone, serious work was required in order to promote the brand and plug the gap with a mission to tour the UK once again firmly on the agenda.

Enter IMPACT’s new management team, which in addition to Ed Nordholm, also includes respected wrestling experts Scott D’amore and Don Callis. Using the ethos of ‘Better Together’, they have done a fantastic job of forging links with other wrestling promotions around the world, which is evidenced by their IMPACT vs. The UK show on Sunday.

“I wrestled on the holiday camps in the UK back in the 90’s” says Scott D’amore, who now serves as a trusted IMPACT executive. “We feel that when relationships can be built between wrestling promotions, the fans win. We have a very inclusive attitude to working with anyone in the industry”.

This has proved to be true. Eagle-eyed fans will have noticed that IMPACT has provided the WWE Network with content from its vast video library, and they also recently sent one of their top stars, Pentagon Jr., to ‘ALL IN’, which was a huge independent show in Chicago.

IMPACT has allowed WWE to use some of the character names that they helped develop, this was the case with the grappler known as EC3. IMPACT will also be taping shows in Mexico next week. Things are definitely on the up.

For IMPACT and other promotions around the world including New Japan Pro Wrestling, the UK is an important market to crack. Britain has a rich pro wrestling history and is currently producing some of the world’s top talent. The popularity of different wrestling groups has also exploded thanks to internet streaming, so there is huge audience potential, and it seems like fans can’t get enough.

IMPACT’s show from Manchester pulled in a live crowd of almost 1,000 people and was shown around the world via TWITCH.TV. Wrestling MediaCon itself was launched to meet the needs of hardcore pro wrestling fans. This loyal bunch are akin to comic book or sci-fi aficionados in that they love to debate storylines and engage in cosplay. Wrestling MediaCon attracted fans from far and wide, dressed up as their favourite icons such as The Dudley Boyz and Mick Foley. The convention also hosted a Hall of Fame and autograph signings with wrestling royalty such as Pat Patterson and Jeff Jarrett.

As bell time neared, we were able to talk to the wrestlers and get their thoughts on wrestling being hot again. Eli Drake, who took on Scotland’s Joe Hendry in a highly competitive bout shared some of his thoughts on the subject:

“It’s amazing. When you can get an on a bigger platform with a bigger audience, with more eyes on you, there’s nothing better than that. I feel like we are really putting out a good product. It’s very rewarding. I’ve been with the company for three and a half years, and we’ve hit some rough patches but I feel now like we’ve really hit a groove. It’s awesome”.

Flavourmag was impressed by the dedication shown by the pro wrestlers performing at Wrestling MediaCon. The IMPACT stars that we talked to seemed to really appreciate their special relationship with Brit fans and told us that they always look forward to performing on these shores, not least because of our passion, and football terrace style chants. Flavourmag will be posting a short video of all the coverage from the event very soon.

For IMPACT, it was a welcome return to action here, and an important step in rebuilding the brand and presenting a new crop of more than capable stars. Judging by the reception they received from the fans in attendance, here’s hoping that we won’t have to wait too long before they come back again.

The IMPACT show at Wrestling MediaCon will air in full on Fight Network UK (Sky Channel 455) at 9pm on Thursday September 13.