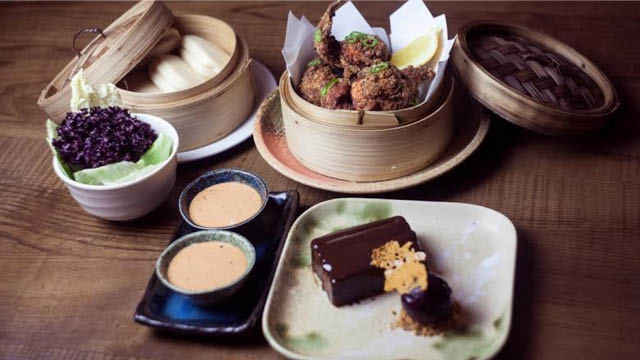 Following its success last year, Flesh & Buns will be bringing ‘finger lickin’ holiday cheer back to London with the Japanese Fried Chicken (JFC) Feasting Basket. A perfect alternative for those tired of Turkey in the run up to Christmas.

While not a typical festive dish in Europe, feasting on fried chicken has been a Christmas tradition in Japan since the mid-seventies. In 1974, fast-food giant KFC introduced its Christmas ‘Party Bucket’, complete with fries and wings, to the discerning Japanese market to bridge a gap during a time when turkey was not available.

From the 1st to the 23rd December, diners at the Covent Garden restaurant will be able to tuck into a steamer basket of Buttermilk and shichimi fried half-chicken with BBQ mayonnaise, served with a fresh salad and signature steamed buns, followed by a rich and chocolatey Yamazaki cake and all washed down with a Spiced rum and grenadine hard shake.

Designed to share, the Japanese Fried Chicken Feasting Basket is priced at £37.00 for two.