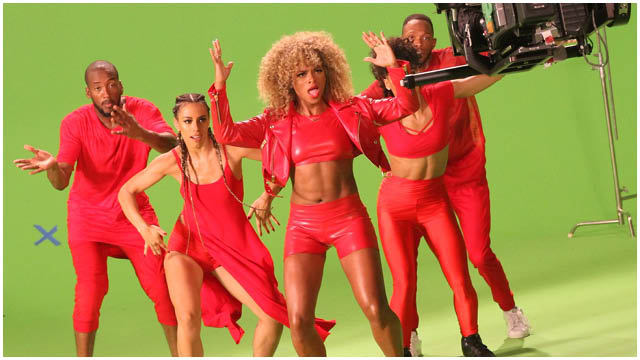 Fleur East has unleashed her new video SAX. The video is a stunning array of visual colours and the old skool beat make the song immediately recognisable.

Fleur East the blonde bombshell gets her Beyonce on, with dance moves, tight dresses and shorts and enough energy to light up small town for a week. From the very beginning Fleur confidently demands ‘give it to me’, before the slick production of Norwegian duo Electric kicks in to high gear. The stomping bassline is accompanied by sprightly guitar riffs, clapping, call-and-response chants, an instantly memorable saxophone hook and an explosive chorus. The video comes just moments after Fleur East launched her Lipsy clothing collection which we absolutely adore. As one of the X Factor’s most memorable stars, Fleur kept the audience and judges captivated during the 2014 series with her varied performances and undeniable stage presence. Under the mentorship of Simon Cowell her show stopping performance of Uptown Funk was arguably the highlight of the whole series, peaking at Number 1 on iTunes. Loving Fleur East’s dress from the video? Get similar looks and style from the House of CB collection.

‘Sax’ is the first single to be taken from Fleur’s debut album due out this November. Fleur has spent the last eight months writing and recording the record working with luminary producers such as Fraser T Smith, Rodney Jerkins, TMS and Oak. The video for ‘Sax’ was shot recently in LA and will premiere soon.