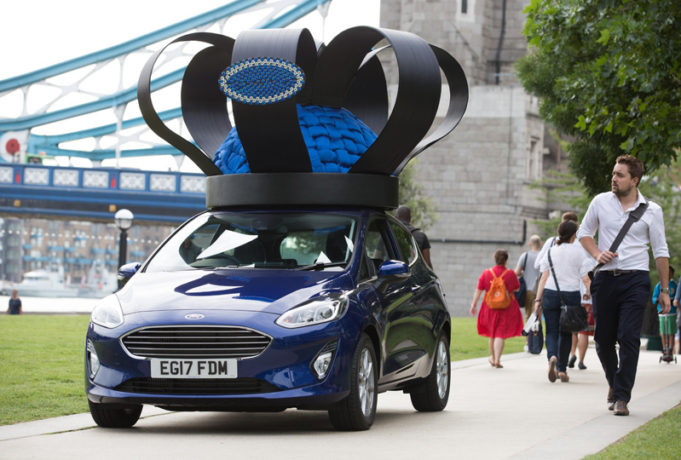 To celebrate the arrival of All-New Ford Fiesta and its continued status of the nation’s favourite small car, Ford teamed up with royal milliner Rosie Olivia to physically crown the new model and celebrate its eight-year reign in style fit for a royal. The final details were inspired by the new Fiesta; a quilted leather headband and royal blue crown jewels. Rosie then worked with a talented team of designers and 3D scanners and carpenters to scale up her creation to Fiesta size. The giant crown weighs in at 90kg, features 200 hand painted crystals and uses 800m of seat belts. Since its arrival in 1976, over 4.5 million Brits have purchased a Fiesta and so it seemed only fitting that this accolade was given recognition by royal milliner Rosie Olivia, through the creation of its own crown.

‘I’ve designed hats for royalty, but it was a real honour to help celebrate the arrival of the new Fiesta by designing its first ever crown. My first car was a Fiesta and I have driven one ever since – if anyone thinks it deserves a tribute it’s me. It was essential that the crown reflected the detail and craftsmanship of the car, whilst also meeting the rules and guidelines that I use when designing hats for my clients. I’m thrilled with the result – seeing it parade down Tower Bridge was a crowning moment’.