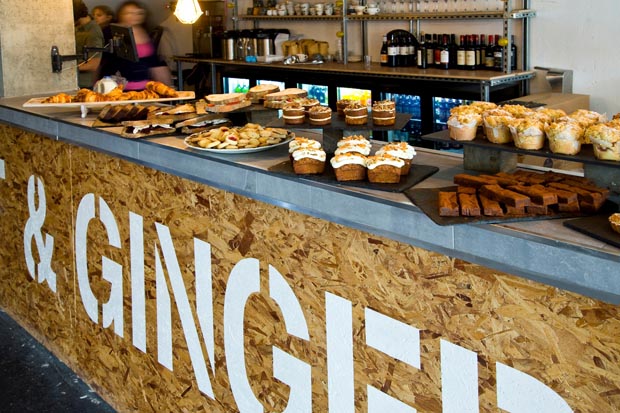 London is known for taking places known as ‘cheap and cheerful’ and turning them ‘expensive and elitist’ but the Whitechapel area on the edge of Shoreditch has escaped all these tags. The main high street of Mile End Road has escaped all these tags and managed to achieve a happy medium in ‘affordable and amiable’. It’s still easy to pick out the F&G heart logo that we’re looking for…

If you’ve been to the delightful – and crowded – Foxcroft and Ginger in Berwick Street you will be expecting a wait for a table and some excellent sourdough pizza. But the Whitechapel branch is so much more than it’s popular central alternative. We were greeted by attentive staff who were easy to get hold of when asking questions or making a request – something that some people may tell you the cafe struggled with when opening but appears to no longer be an issue. There were more than enough customers, from families on a day out in the summer holidays to the usual gossip (that is what you call a gathering of them, right?) of hipsters desperately trying to make it their new place before it became popular.

It will be popular. Brunch is already a big hit with the french toast apparently being in very high demand and we were sorry to have missed it. Lunch was a selection of difficult choices, with the sticky lamb burger coming in a close second and the salads only missing out because it wouldn’t have gone with the tea. It’s not often you fall in love with such a small tea menu but if your idea of heaven is reasonably priced tannin-free hot drinks then you’ll be even happier than I was here.

Of course there’s also the Camden pale ale and dry hop lager on tap if you’re looking for something a bit riskier at lunch or are popping by in the evening. Or the usual selection of classy soft drinks that you’d expect in the industrially-styled modern cafes of London.

The great thing about the grilled sourdough sandwiches is that they sound like they’re dumped full of strong flavours but everything is very carefully done and the jalapenos or coriander are kept to a minimum – a good policy for lunch time when you’re looking for complex food that doesn’t overpower the rest of your day. Both of us would highly recommend popping in for a muffin or slice of cake if you’re in a hurry. They’re probably the second best thing about the cafe, after the tea.

We went a bit crazy and ordered some polenta chips to fill out the sandwiches, as we’d skipped breakfast in anticipation. We were warned it was a lot of food but we did not listen. Glad we didn’t because they were chunky and moreish and I even forgive myself that I left one on the plate.

The open front restaurant is perhaps better suited to warm, sunny days were you can spend an entire afternoon lounging around and nibbling through the menu and cakes. It’s not quite found it’s perfect clientele yet so can’t honestly say whether this place would be for everyone. If you’re not a fan of brunching or spending hours on British teatime then maybe pop along in the evening and take in their late night crowd. It’s definitely worth a visit if you enjoy the central branch as it carries much of the appeal from their and adds the joy of not having to shout too loud to be heard and not being hurried out the door by the next customers.