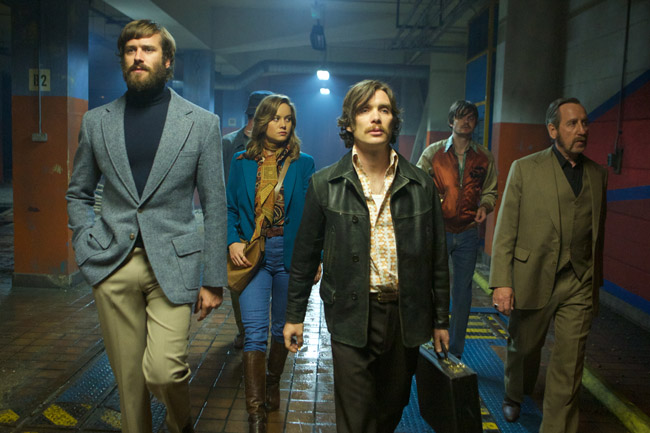 British director Ben Wheatley has never shied away from controversy or dividing audiences.  Has he hit the target with his latest, Free Fire?

Ben Wheatley likes his single locations.  First, there was a field (A Field In England), then a tower block (High-Rise) and now a disused warehouse in Free Fire, which was also the movie that closed the London Film Festival last year.  It takes the phrase going out with a bang to literal and extreme lengths.

From the trailer, this looked like a re-working of Tarantino’s Reservoir Dogs but by another name.  The idea is simple enough: a couple of crooks, together with their go-between, arrive at a disused warehouse ready to buy a stack of illegal firearms.  The sellers arrive but an old disagreement between two minor members of the gangs resurrects itself and the situation erupts into a massive shoot-out and a game of survival.

Reservoir Dogs this ain’t.  And the echoes are fewer than you might expect.  True, Wheatley has followed Tarantino’s lead in constructing a plot based on the three unities from classical drama – action (one main storyline with minimal sub-plots), place (one location) and time (usually set within 24 hours).  Although, he plays fast and loose with time because the story is narrowed down to ninety minutes.  How do we know?  Armie Hammer says so!  After he’s been wounded, he observes ruefully that, once the bullet penetrates, you have just ninety minutes to get treatment if you’re going to stand any chance of survival.  That aside, it ticks all three boxes, with the action and the shoot-outs taking place in the deserted warehouse, and little in the way of stories on the peripheral.  Except for the one that kicks off all the violence.

There’s plenty of that, and we’re not spared any wince-making moments.  Sam Riley meets an especially gruesome end and Sharlto Copley’s encounter with his final bullet is just as graphic.  In truth, none of them can shoot for toffee.  Just about everybody gets hit in the leg: managing to hit somebody anywhere else is beyond either gang.  Getting killed is hard, killing somebody else is evening harder.

All the blood is offset by the film’s spiky humour.  Armie Hammer delights in taunting older adversary, Wheatley regular Michael Smiley, poking fun at his age and never holding back.  But the top comedy turn comes from Copley, full of 70s attitudes and wearing the mandatory wide shirt collar over the top of his jacket.  He’s terribly protective of his suit, which he claims came from Savile Row, don’t you know?  It’s far and away the best performance in the film, although Hammer is surprisingly good as the supercilious fence who’s so vain that, when he’s shot in the leg, grabs something that can double as a walking stick.  No hobbling around for him.

The rest of the cast – and it’s hardly inferior – doesn’t come off so well.  The talented chameleon that is Jack Reynor, is buried underneath long hair, a beard and glasses, and has precious little to do other than keep needling Sam Riley.  The real victim is Brie Larson who is the standard token woman from so many 70s films.  While Wheatley attempts to make her just as tough as her male counterparts, her character is so ill-defined that she simply floats around and her fate descends into the old cliché about the female of the species being deadlier than the male.

One of the best things about High Rise last year was its use of music and, yet again, Wheatley and his crew have chosen some tracks you’d never expect to hear in this context. The sweet, almost sickly strains, of John Denver’s Annie’s Song waft through the warehouse from the van’s stereo at the start of the film and put in a second appearance towards the end in the blood-soaked climax.  It works a treat.

If only the film as a whole could have reached those heights.  You won’t get bored during Free Fire, although you might lose interest occasionally. You’ll laugh and you’ll wince.  But you won’t feel wholly satisfied.  It’s perilously close to being a misfire.