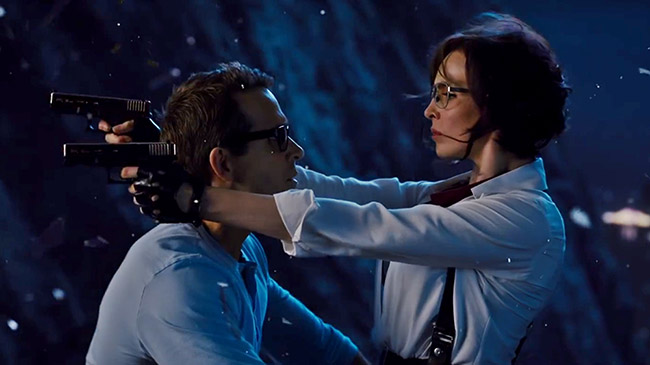 If you are familiar with Jim Carrey’s The Truman Show, then you already know the vibe Night at the Museum franchise director Shawn Levy is trying to portray with Free Guy. A film that stars the lovable Ryan Reynolds as an NPC (non-playable character to those not familiar with the gaming world) with all the humour you would expect from a PG-rated Deadpool.

Reynolds plays the likeable Blue Shirt Guy, a background character in the popular video game Free City, working as a bank teller with a security guard as his best Buddy (Lil Rel Howery), each day is the same old routine, but this AI is about to become a free-thinking AI when he crosses paths with the woman of his dreams Molotovgirl (Jodie Comer). He begins to question everything about the world he lives in as he dons a pair of sunglasses – usually worn by the badass playable characters – and begins to take on stalker-like traits in order to win her affections.

Hang in there, this movie isn’t just all set in the video game world, cut to the real world where you find Taika Waititi’s dickwad owner of the game, Antwon treating his employers like dirt because of his so-called success, while the very foundations of his uber-popular game were actually stolen from Molotovgirl’s real-world player Milly and his current employee Keys (Joe Keery). Keys just wants a quiet life but Milly on the other hand is suing Antwon for stealing their ideas and needs to find hard evidence, evidence that’s hidden somewhere in the game.

Comer completely steals the limelight in her alternative state as Molotovgirl, not only is she the stereotypical sexy character but she’s got balls, balls so big she crushes the action sequences like it’s just another day at the office as she enlists Guy to track down that all-important piece of evidence while Antwon and his team have a meltdown over this free-thinking NPC who has now gone viral.

With a cameo from the ever flexible Channing Tatum and a few other famous names adding their voices to characters, Reynolds and co have created an escapists dream of Friday night popcorn fodder filled with Disney Easter eggs to get even the smallest of nerds a bit over-excited.