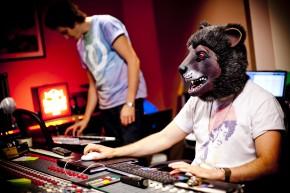 At the end of May Toddla T spent two weeks in the Red Bull Studios London working with the hottest up and coming artists from across the UK on the brand new free to download Red Bull Mixtape. From 27th June this will be available to download in full from www.redbullstudios.com. The 30-minute mixtape has everything from lo-fi electro to R&B, with typical Toddla T influences throughout, however the producer was adamant to take a back seat in the creative process.

Nine artists hand picked by Toddla T headed to the London Bridge based studios between 23rd May and 3rd June to each record an individual track with the Radio 1 DJ. Chosen for their talent and influence in their local scene, Toddla produced a track with each artist to form part of the Mixtape album. Either working together on existing tracks, or writing something completely from scratch, Toddla acted as mentor and producer in the studio helping them to expand and showcase their talents.

Toddla T said: “It’s been great working with such fresh talent from across the UK. We’ve definitely learnt from each other and added something to each other’s music.”

To download the Red Bull Mixtape and for more information on what went on in the studio head to www.redbullstudios.com.