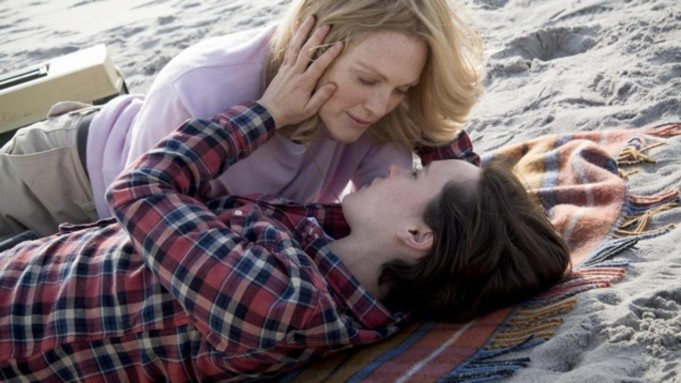 Freeheld tell’s Laurel Hester’s story when it grabbed the national headlines in the states back in 2005, when all this dying woman wanted was for her partner to receive her pension in order to remain financial stable after her death but because she was in a same sex relationship she was denied her dying wish.

Laurel and her partner, Stacie’s story may have already been extensively covered and told in the documentary of the same name, Freeheld, but Director Peter Sollett has brought this to the big screen for a wider audience to experience the injustice these women suffered just because they happened to love each other in a time where same-sex partnerships were still frowned upon and met with disdain. Laurel (Julianne Moore), was a long serving member of Ocean County Police force, in fact, she gave 23 years of her life to the force but over the years kept her sexuality a secret as being a woman in the force was hard enough to achieve any kind of status. If they knew of her sexual preference any kind of status would have been impossible to obtain, especially in Ocean County. Very early on in the film, Laurel falls in love with Stacie (Ellen Page), a woman much younger than herself, but their bond becomes instantly unbreakable. Before too long Laurel is diagnosed with stage IV lung cancer which is extremely aggressive and impossible to cure. Laurel begins to get her life in order for her impending death so Stacie is well looked after but hits a stumbling block when her request to have her pension transferred to Stacie is denied purely based on their sexuality with one of the freeholder’s stating “this simply act of love could threaten the sanctity of marriage”.

With the support from Dane Wells (Michael Shannon) her partner on the force who she was so close with but he knew nothing about her sexual preferences, they appealed the decision only to be met with further injustice. His support didn’t come easily to him as he struggles with his own moral views but his loyalty to his friend and seeing how much in love these women were, opened up his blinkered views. When civil rights activist Steven Goldstein (Steve Carell) hears of Laurel’s struggle he joins the battle with his outspoken and passionate loud mouth to make sure people would sit up and listen and he certainly does this by making people feel uncomfortable with the truth. The court battle scenes in Freeheld seemed to lack any real focus with the script just a little too thin to fully make the audience understand how much of a battle this would have been, but essentially the emphasis is placed on telling more of a love story than a gritty political drama most would assume it is considering its subject matter.

Julianne Moore yet again is a force to be reckoned with her performance is extremely poignant making Laurel’s struggle such a tough watch. The commitment and extensive research Moore carried out to portray Laurel certainly paid off, her transformation on screen just adds to her outstanding performance. Carell also brings an air of eccentricity and humour to his role which lightens up a really emotionally intense story.