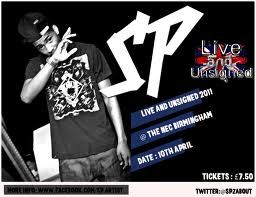 20-year-old Trevion Rowe, aka SP, is a Birmingham MC who has been steadily on the rise for some time; 2012 is set to be his year as the rapper prepares to unleash his debut album. The rapper has been supported by RWD Mag, Urban Development, BBC Introducing, MTV – The Wrap Up and of course, us.

From writing poetry as a young child to attending raves and radio shows, the young rapper managed to grab a spot at a festival alongside MC’s Bashy and Wretch 32 at just 16.

As his buzz spread, the Midlands MC landed a slot at the infamous event ‘I luv Live’ where he captured the attention of London’s brightest industry heads. Several tracks and performances later, SP was supporting artists such as Tyga, Devlin and Example live.

Sadly, the rapper suffered some unfortunate set-backs as his career was soaring, however he didn’t let that bring him down as he continued to mingle with the right people, which led to him meeting Dappy.

After some inspirational advice from the N-Dubz rapper, things picked up for the MC which led to him working on his current project, ‘Coming Along’. The project is a series of EPs to get us hyped for the release of his debit album in October, which goes by the same name.

The series will feature 6 EP’s and even their titles have quite obviously been thought over intricately; the up-coming EP titles are as follows:

The first EP of the series, ‘Create Opportunity’, is a smooth blend of intelligent rap, grimey beats and emotive lyrics, making the EP a great listen. Make sure you keep your eyes peeled for the rapper who is sure to be doing big things in the near future.