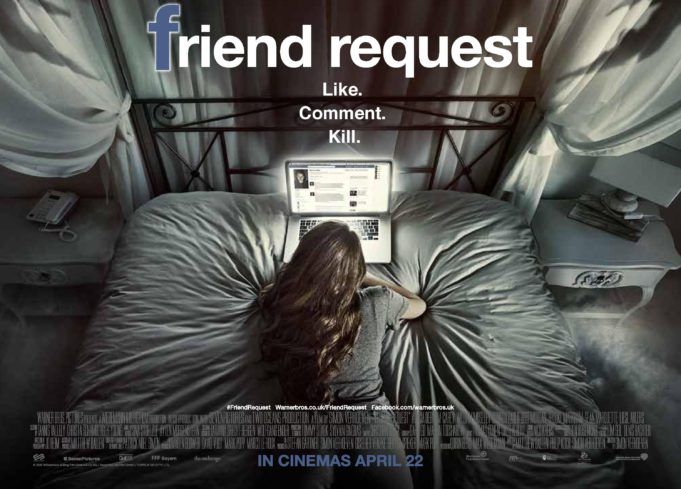 German director Simon Verhoeven, with Friend Request, has taken a leap away from his normal comedic route and gone with a ‘horror’ thriller to flap his directorial chops, not doing a bad job but unfortunate for him this story has been told time and time again and it’s getting a bit old.

Friend Request, much like last year’s Unfriended takes a delve into the social media phenomena that is circulating like a hungry shark around the horror genre right now.  Internet addiction references pop up from time to time in what seems an attempt to connect with the audience the film is really trying to attract. For all intent and purpose they have hit the nail on the head with our total infatuation with social media and how many ‘Friends’ we can accumulate. As for the plot, this is where Friend Request is truly lacking, full of clichés with a formula we have all seen before, instead of walking away from the noise you just heard, while by yourself in a dark and ominous place you walk straight towards it. Opening scene consists of a professor opening his class announcing that one of the students has committed suicide and the video of her suicide was posted online. This is where we rewind two weeks to find out exactly how Ma-Rina came to kill herself.

When little Miss popular Laura (Debnam-Carey), who has over 800 friends on Facebook and studies psychology, befriends lonely Ma-Rina becoming her only Facebook friend, her life becomes a complete nightmare. Ma-Rina becomes completely obsessed with Laura, turning into a cyber stalker and generally just a little bit scary in her pursuit to become ‘bestie’s’. As this, all becomes too much for Laura she unfriends Ma-Rina on Facebook leading to Ma-Rina taking her own life and returning from the dead to haunt Laura and her friends killing them off, one by one. There are a number of jumpy moments to be had, but what makes them un-nerving is simply the placing of the sound effects and music, which accompany the use of atmospheric visuals which slot into place like two pieces of a puzzle. Light hearted humour is also used to break up the monotony of a tired plot, Laura who becomes friends again with the deceased Ma-Rina is quite angrily told by her upset roommate ‘Unfriend the dead bitch’.

Credit where credit is due, Friend Request has the odd surprise and plot twist and the use of irony in places makes you think OK maybe they aren’t taking this too seriously, trying to poke fun at themselves.

Friend Request is out in Cinemas April 20.