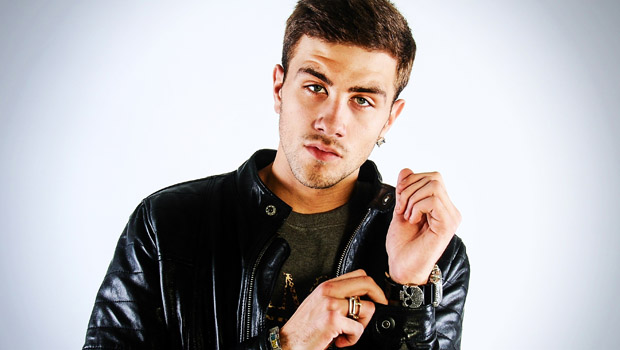 When British rapper, songwriter and record producer Fugative first came to our attention he was a 15-year-old school boy with a babyface, big dreams and released music that made huge waves of the UK charts. After a brief hiatus, the rapper whose real name is Harry James Byart is now 18 and speaks with a maturity well beyond his years but still has is boyish good looks. He has recently released his latest single O.T.T and is currently working on creating and choosing songs for two EPs and his debut album. When and where did your love of music begin? When I was 7; I walked into a studio for the first time in Brick Lane. The flashing lights on all the different machines sent me into a trance and I’ve been in love ever since.

What’s Fugative about? I’m a producer, artist and songwriter who’s yet to show my full potential.

What do you love most about what you do? I love being able to make a record by myself from scratch; then go and stand on a stage in front of all my fans and sharing my music with them.

What’s been the highlight of your career so far? Performing at Party in The Park in Leeds hearing that many people sing my song was mesmerizing.

What motivates you? I’ve always been a self motivated person and the satisfaction I get out of finishing a track and getting the feedback off my fans always gives me the motivation to produce the next.

What 5 artists are you listening to at the moment?
Sosa, Big Sean, G-Fresh, French Montana, Kendrick Lamar

What’s the biggest challenge you’ve faced so far in your career? Learning to recognise the people who have my best interests at heart and surrounding myself with them. Tell me about O.T.T? It’s my new single, out now! You can download it on iTunes! I just wanted to show people what I am capable of doing as it’s so different to my other tracks.

So if you’re doing things O.T.T. What’s been your biggest extravagance? Lately I have been spending more money on my house and studio more than anything else.

In the video you’re hugging a stunning lady what qualities do you look for in a woman? Obviously I’m not going to say I don’t like a good looking girl; but personality is really important and a good taste in music is paramount.

If you created a super group of five members, who would be your first choices? Dead or alive. Biggie, Pharrell, Marvin Gaye, Andre 3000 and Whitney Houston.

If you hadn’t been a rapper or producer what do you think you’d want to do with your life? I couldn’t really imagine doing anything else but if I had too something in the music industry still, like a record label A&R.

Major ambitions for the next phase of your career? This year I’m working on a couple of EPs and the main focus is getting my album sounding perfect. I’m choosing from 400 plus tracks so I’m still in the early stages.

Do you have any collaborations with other artists coming up? Yeah there is a couple coming up but I don’t want to say too much this early just wait for the music!

Who are your hip-hop influences? Its so across the board from artists like Biggie, Big L to current artists like ASAP and Kanye; also British artists like Kano and Mike Skinner. How do you feel about the new internet crazes like Hype Machine and Spotify, are they good tools for the industry? I think it comes with good and bad. On one side you’re getting your music out to a lot of people in the fastest way; on the other side you’re loosing a lot of sales. But I guess you have to make the best of it its 2013 so whether it means you need to tour more, record more, it doesn’t matter because I love my job and I’m willing to do whatever it takes.

Where do you go to have fun? Just chilling with my pals, whether it’s in the studio or just indoors.

Who’s your hero? My Mum.

At the moment you are… taking down my Christmas tree, dancing around to music and answering these questions!