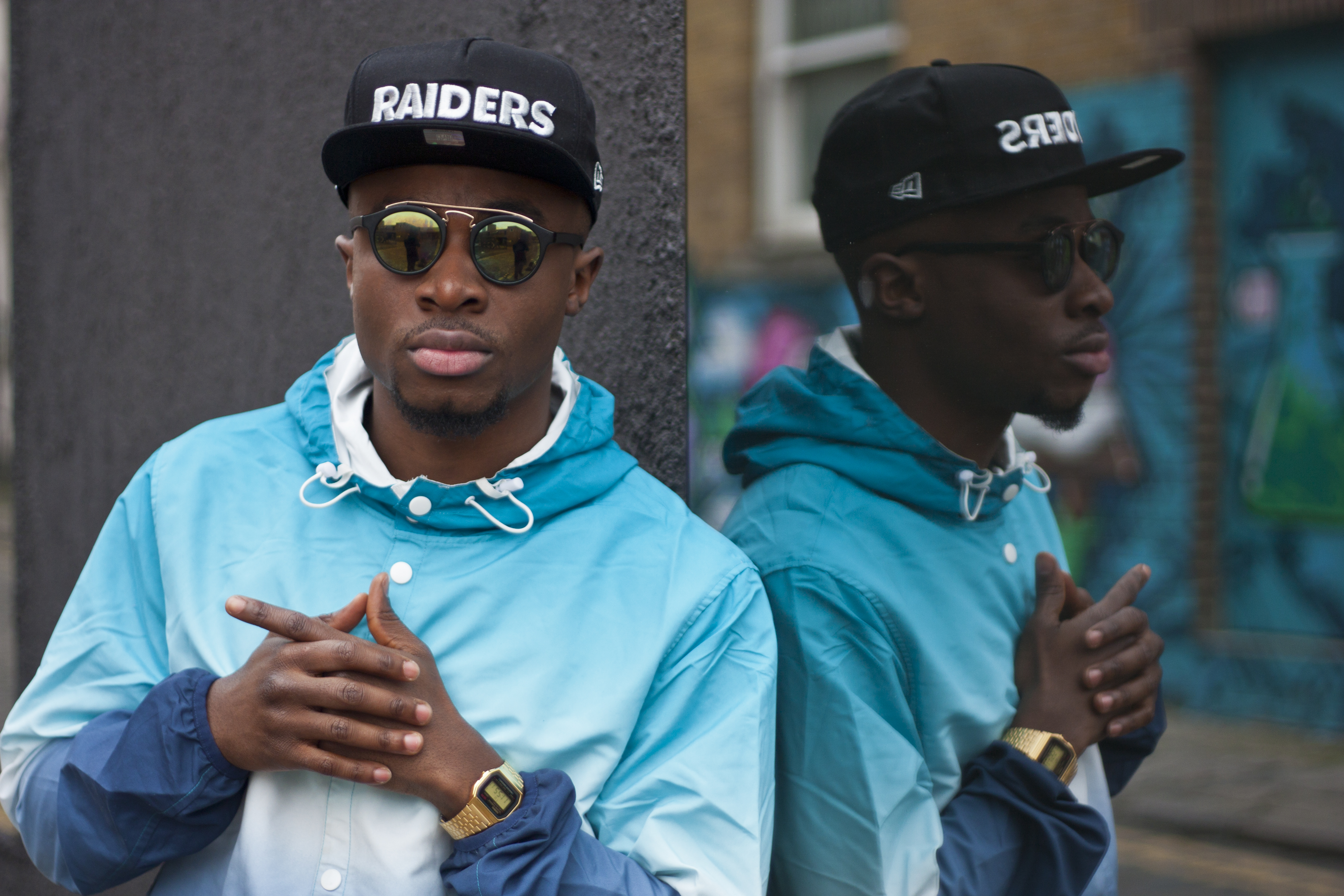 Very few afrobeat stars have arrived as fully formed as 24-year-old Fuse ODG. He is undisputedly the biggest breakthrough artist of 2013 and his achievements have already thrust him into a higher orbit. 20 million YouTube views? Yep. The first Ghanaian artist to ever have a single charted at number one on the iTunes World Chart? Absolutely. Both Chris Brown and Prime Minister David Cameron have been seen dancing to his hit ‘Azonto’, not to mention The Duke of Cambridge, Prince William, who also added his royal approval. You get the idea. But that’s no surprise considering how much Fuse has been praised for his ability in converging positivity and inspirational melodies onto infectious beats. And his coup doesn’t stop there. “I want my music to be heard in every single household similar to how a fuse is in a plug.” He’s proving that declaration with his latest single, ‘Antenna,’ which is already shaping up to outdo its predecessor.

If you’re wondering if the title of Fuse’s latest offering is a gesture to his love of electrical devices, it is not. The title comes from a certain woman having a hold on him. “When it came to me I was initially thinking about a lady controlling a guy similar to an antenna, TV remote or a recording device.” Known by many as Fuse ODG, and by a few as Richard Abiona — he is a musical pedigree on the brink of basking in the glory of chart success. Nevertheless, he is loved by the ladies for a variety of reasons — his voice, his songs, his dance moves and his smile. But if truth be told, the unspoken reason as to why millions love him is because he belongs to them. Leaping from the underground to the mainstream, Fuse is now connecting the dots to world domination with a little help from Wyclef Jean. And shaking off the one-hit wonder shackles, we find out more about afrobeats’ biggest pinup, who has the whole world dancing.


What’s a typical day like for you these days?

During the day, I do a lot of interviews and in the night, I do lots of shows. For example, I had two shows alone in one-night yesterday. I’ve got several more coming up, including one with Sean Paul. In the daytime, I’m usually in the studio doing interviews over the phone.

Why did you choose to go by Fuse ODG?


ODG stands for Off The Ground – which is a collective consisting of musicians, producers, entrepreneur and rappers. As I came from the group, I decided to keep the name so that the world knows where I’m from. I want my music to be heard in every single household similar to how a fuse is in a plug. That’s what my name is about.

Can you draw any parallels between him and Richard Abiona?

I guess we’re the same people [laughs]. Fuse is a lot crazier when he is on stage. He tends to get very wild. Then again, they both share the same mentality in helping others. Fuse’s music is about helping other people with the whole This Is New Africa movement. Richard does a lot of work with young people. I’ve set up a community group giving young people activities to do during the summertime. As Richard I’m very much involved in giving back to the community through music workshops, and that’s where Fuse also gets involved.

In your song ‘Atenna’, you say: “What I’m gonna tell my mommy oh.” What’s your relationship like with your mother?

I love my mum. She always tends to come up a lot in my songs. I’ve got a great relationship with her, and at the moment she is really happy with how well everything has been going. As I am doing music full time, I am now able to support her financially. When I was in university, like many African parents, she wanted me to be something that she deemed more stable – a doctor or a lawyer, but instead I took the path to make music. Obviously, because she has seen what’s coming out of it, she now understands exactly what I’m doing. If there was no money coming out of it, she would definitely be asking questions like [says in an African accent] ‘Why are you busy for nothing?’ [laughs]. But, all in all, she’s really proud because every party she goes to she hears my music and when she goes over to Ghana, she sees me on posters all over the place. Where did the inspiration for ‘Antenna’ come from?

It took me by surprise the way ‘Azonto’ connected with the Western world. I came across Asian people playing it at their weddings and even heard it in China. So I wanted to make something again that would amalgamate music from the West with afrobeats. And that’s why you’ve got the [starts singing] drums in the middle, and the whole point was to mix the two words together. Even though it’s African music it can’t be denied – it’s so good you want to be a part of it.  Back in the day being African wasn’t that cool, but now when people hear our music, they are like ‘Wow!’ The idea was to mix the two worlds musically and the concept was just something that randomly came to me [starts singing the chorus of ‘Antenna’]. When it came to me, I was initially thinking about a lady controlling a guy similar to an antenna, TV remote or a recording device. So I’m asking, ‘What am I going to tell my mum’ because there is nothing I can do as this girl has got a hold on me [sings the chorus again].

You got Wyclef Jean to collaborate with you on ‘Antenna’. Describe meeting him for the first time.

That was a crazy moment. We met back in December at a show we were both doing together in Ivory Coast. I remember arriving there and seeing billboards with myself and Wyclef all over the place. When the promoters told him a bit about me as well as playing him ‘Azonto’, he still he wanted to know more. So when I first met him, we talked for a while and before we knew it we started freestyling together. Afterwards, he was like ‘You remind me of me when I was younger. You young bloods keep me on my toes.’ I was laughing when he said that because I was saying to myself, ‘I grew up listening to your music.’ The night before the actual show we had a dinner party, and whilst we were all eating ‘Antenna’ came on, and he [Wyclef] was like, ‘This is crazy.’ He even told the DJ to pull it up like fifty times. It was like he didn’t know what to do with himself, the way he was sweating and dancing was surreal. He then went on the mic and said he wanted to do the official remix for the song – the rest is history.

How much money would it take for you to ring up Wyclef after this interview and ask him to reform The Fugees?

I can actually see it happening. He talks very highly of [Lauryn and Pras] and I’m sure it will happen. I actually speak to Wyclef almost every day as we are also working on a few other things together. But only god knows what’s going to happen in the end. But the next time I speak to him, I’ll find out for you and let you know.

Is it true that Prime Minister David Cameron is a fan of ‘Azonto’?

I remember when we met him earlier this year and spoke to him about the song. My manager then showed him the dance which he attempted to do, and after that we also convinced him to put his Azonto fist up [laughs]. I don’t know if he remembers, but he is definitely aware of the dance.

Do you think Britain will ever have a black Prime Minister?

America elected Barack Obama – anything is possible. I remember years ago when Tupac said, ‘We ain’t ready to see a black President,’ but it has happened. There are a lot of intelligent young people doing great things. I think the future is bright for the black community.

Hundreds of your Twitter followers are starting to talk a lot about how you are going to be the father of their children. What’s it like to have people drooling over you?

I like hearing and also reading stuff like that. I find them really funny. It’s also crazy, but I really just try to focus on the music because everything else can be overwhelming. There’s a lot more work to be done and that’s what keeps me grounded.

What do you think are the characteristics behind your appeal?

Every song that I release I like to get people dancing to it as well as doing their own versions before the official video actually comes out. I like making music for people, who can relate to the messages behind my music, which is all about creating an awareness of this new Africa movement. All in all, I think it’s also a balance in making music and allowing people to relate to it.

I have to ask: What are some warning signs that a girl might be no good?

1) If she can’t cook. 2) If all your friends know about her before you even sleep together – she’s not exclusive at all. 3) If you’re in a relationship together, and she insists that you both stay on BBM – couples shouldn’t be on BBM when they are in a relationship as it can cause problems. 4) And if she has too many pictures exposing her body on Instagram.

Do you find it odd that English folks love your music, considering the genre’s a million miles from their usual flavour?

I don’t think it’s weird. I just think the time is right for afrobeats. No one really understood what ‘Gangnam Style’ was about apart from the fact that it was so addictive. There’s music coming through that’s connecting with the world, and I feel as though the vibe is right for world music to shine and connect with people. From a UK prospective I’m really happy to be able to be connecting with people at home and aboard.