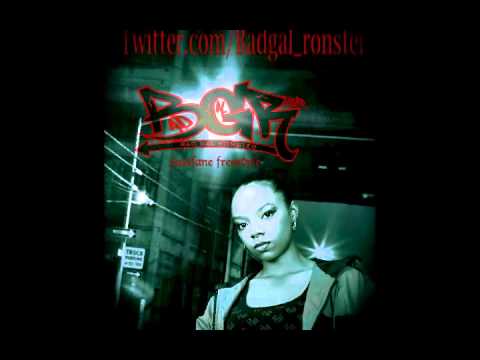 So who do we have in this next installment of Future Flavours? Well there is a femcee from East London called Bad Gal Ronster, a rock outfit called the Thirst ready to quench you with some rock-funk-soulful something, the first lady out of Dizzee Rascal’s camp Dirtee Stank records, Pepper and another lady signing to a massive label (Digital Soundboy Recordings_ B-traits (dj and producer) with her hugely catchy 90’s tinged rave, garage extravaganza.

So let’s not waste time we going in! Some of you may remember a little while ago I wrote a piece on the UK femcee game www.flavourmag.co.uk/femcees-lyricism-needs-you.  I was posing a challenge to new female emcees to add depth to the UK female fraternity which seems decidedly thin on the ground -step to the podium Badgal Ronster straight from E15 to tear up the mic?

I first heard her through U-tube from a friend of mine and we both agreed that she had that little edge on the competition (the difference between success and mediocrity is usually only down to small margins) where she was dropping bars over the top of some well-known instrumentals. Check her on the Fast Lane instrumental where she goes in on being a female in the testosterone world of the emcee-call in the paramedics

She displays ferocious double time and some social awareness.

Blessed with a distinctive voice and an un-mistakable London twang (Manor Park to be exact) she sprays bars of sodium chloride aimed at fake femcees and emcees that talk a good fight but buckle under the slightest hint of pressure-ya weak!

So with all this hype she is rightfully so dropping her mix-tape From The Ground Up which promises to give a taster of the potential from a femcee with the most-est! Having worked with the likes of Chipmunk and Mz Bratt, Badgal Ronster is aiming a aiming a Muay Thai knee to the solar plexus. Indeed she can, she is also a kick-boxer so I expect if she states: “I will hurt you emcees” we can safely say that would be a genuine statement! Next up is a South London band that will be the ones to watch on the indie circuit, festival circuit and no doubt any other circuit where good music is appreciated. In a sense maybe they are not Future Flavours having toured with Pete Doherty and The Rolling Stones and opened up for bands like the Libertines.

Fusing a plethora of elements from rock, to funk, to soul and counting inspiration from people like Jimi Hendrix this foursome comprising of two brothers and two friends bring that live music that we all love blasting through. While they have been around since 2009 the question why haven’t they blown up already might come to mind but I choose to ignore such a question-they will blow up because their talent deserves it?!

Having witnessed a live performance by the band for the new music programme soon to launch Quality Control, it was their confident swagger, professionalism, mixed with brilliant vocals from their lead singer Mensah Hart and an obvious chemistry that shone out.

2011 saw them drop their second EP, Laugh With the Sinners which is a slice of radio friendly, hook driven music awash with guitar riffs, funky beats and rock elements . It’s this kaleidoscope of genres that make them such a brilliant band to hear and they offer a nice change from the chart driven music.

This year sees an even bigger push to take their names to the lips of the big music fanatics. A third EP, Quiet with The Saints is due for a release sometime in summer and a big tour taking in all the universities is also on the cards-definitely cannot wait to see what 2012 brings for this class act. Pepper is the first lady of the phenomenal Dizzee Rascal’s label, Dirtee Stank and she represents a complete contrast to the aggy Dizzee being a female vocalist.

It is an interesting story that some of you will remember where Dizzee was on the panel for the music contest that was meant to be a direct foil to the pantomime antics of X Factor. Must Be The Music was squarely positioned as a show that was meant to bring “real” talent to the fore front.

Katie Pepper happened to be one of those contestants that vindicated the ideology (if you will) behind the show and she shone on the big stage to excite audiences and most importantly Dizzee. Fast forward in time and Pepper is starting to create a buzz within musical ears for those same spot on and powerful vocal performances from the show.

With her other stable mates being grime veterans like Newham Generals she maybe an incongruous element:

“working with Pepper suits me fine. There’s a certain level of class as well which definitely help and on top of that she’s just got a really big voice. The first time I saw her sing at the Must Be The Music auditions she really blew me away” said Dizzee Rascal.

So having a name like Dizzee backing you does not guarantee success, far from it but with the her powerful vocals full of clarity and expression she is undoubtedly on the way. Presently touring with RizzleKicks and new material surely beckoning Pepper could and should be Dirtee Stank’s leading lady-she’s hot!

We raving we raving with B.Traits! It’s no secret that I love drum’n’bass and all that old skool raving vibe that is incidentally really en vogue-think Yasmin and Emelie Sande. Mentioning Yasmin is a perfect link as well to our last Future Flavour, B.Traits because they share a common denominator-Shy Fx.

Shy Fx has been in different musical genres for a while and he has worked with some of the biggest names from the underground and over-ground. It’s no surprise then that B.Traits’ first single, Fever featuring the huge Elizabeth Troy undoubtedly has his influence all over it but let that not negate from this lady’s talents.

Shy Fx has signed this female d/producer to his burgeoning label, Digital Soundboy Recordings and one can see why.

Fever is a huge, huge track that will be doing club land like a particularly virulent air borne virus rather like that film Twenty Eight Days Later but instead of zombies it will be people infected with the physically warping Skanking Virus-deadly. For those that particularly love those old skool rave, garage vibes see how many tracks you can recognise in the single Fever. There is incidentally a Toddla T and DJ Q remix but I love the original which allows Elizabeth Troy’s soaring vocals to really do their beautiful damage.

Fever introduces us nicely to this lady who has already worked with massive names like Doneoand she has been getting radio play on all the big stations-loving B.traits and Fever check it out and watch out!