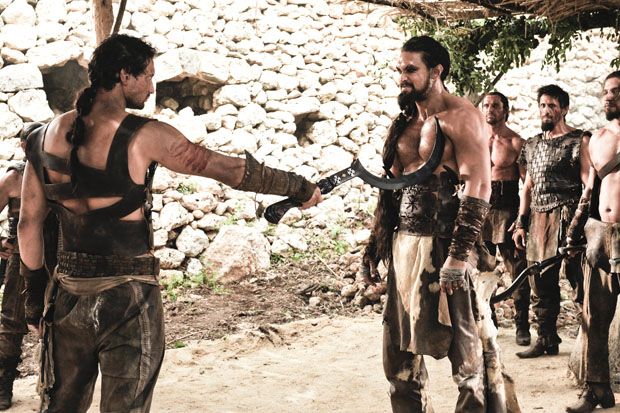 To celebrate the release of HBO’S epic fantasy series ‘Game of Thrones’, which will be coming to DVD and Blu-ray on 5th March, you’ll be excited to know that we’re giving you the chance to win one of the three amazing copies on DVD!

Combining a mythical world with a generation of family feuds, bloody war, treachery, murder, lies and lust, ‘Game of Thrones’ has defined a world so unique, complex and compelling that any preconceived notions of the genre fall away. It has created an ‘accessible fantasy’ epic for the small screen, which became the most watched show* on Sky Atlantic this year.

The noble households are continuing a dark and ancient battle for control of The Iron Throne in a medieval kingdom in turmoil. Some look to the battlefield, some magic, others to their powers of manipulation and cunning in a bid to rule the Seven Kingdoms of Westeros. Yet still behind the Northern Wall lies a bigger threat, and Winter is coming…

Created by BAFTA® award nominee David Benioff (The Kite Runner) and nominated for 13 Emmy® Awards, get prepared to be immersed in pure escapism upon the UK release on 5th March 2012. The DVD and Blu-ray editions are packed with bonus features including a Making of the ‘Game of Thrones’ featurette, Character Profiles, Inside the Night’s Watch and seven episode commentaries.

For facts, clips, interactive maps, and great downloads be sure to visit www.gameofthronesdvd.co.uk

To be in with a chance of winning, simply answer this question below:

What are the families of Westeros battling for?

A) The Iron Throne

B) The Iron Sword

C) The Ironing Board

Send your answer along with your name and address to comps@flavourmag.co.uk and remember to put Game of Thrones in the subject header.

Join the ancient battle with HBO’s Game of Thrones: The Complete First Season, on Blu-ray and DVD from 5th March.