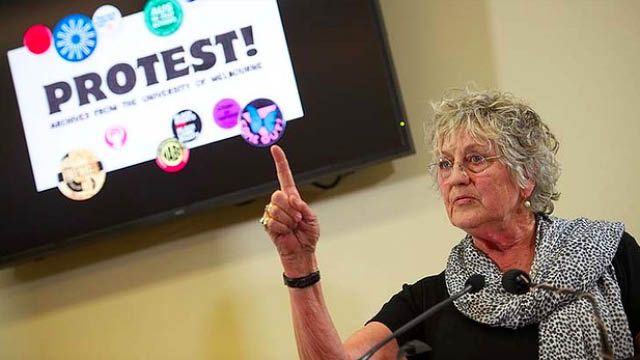 It may have escaped your notice whilst you’ve been here on Flavourmag flipping through skater skirts and faux fur eyelashes or whatever you do here… but the feminists have been debating a crucial issue over the past few days.

The issue is no-platforming. This isn’t where feminists object to certain shoes. This is where someone is removed from the list of speakers at an event because someone else has objected to what they might say or what they have said in the past. Or what they have never said but someone said they said it and everyone doesn’t want to hear them not say it again. Currently that woman is Germaine Greer and arguments have been raised about whether she should have been allowed to give a speech to Cardiff University students on Women and Power.

If you’ve had your head inside a blusher brush since you were ten then you may not be aware that Germaine Greer is a feminist icon. A giantess. She did it all and she did it a long time ago and feminists owe her a ton of stuff. Still with me? Focus. The latest 500 reasons to use skin primer will still be here on Flavourmag when you get back.

Germaine was no-platformed for her “transphobic” views. On Newsnight she was asked whether she thought transgender women were women. She said no. She said it was an opinion. You should see that interview. Watch it below. It is one of the finest examples of someone giving an interview, where they say what they really think about a controversial topic, that you will ever see.

The following backlash has resulted in online death threats for Germaine from trans activists. The reality is that this group, who campaign for the protection of their vulnerable status, are frequently very misogynistic indeed towards women. The general message is “Let us be women with a penis and make sure you see our rights as more important than biological women with no penis or…. we will kill biological women. Sometimes by forcing our “woman penis” inside them.”

I know. I know. It’s all very confusing. Especially when you have a hair wand to wave like Hermione Grainger at your Monday morning bed hair. Stick with me though. This stuff matters.

There is something important happening to feminism here. Men are happening. Feminism is a threat to men. It threatens to take away the power they are keen to hold onto. Feminists demand things. They have started to get a lot of them. The vote was only the beginning it turns out. Poor men. Now feminists have the right to work, the right to not be raped within marriage, the right to education. All that – but they just won’t stop. Rape Crisis centres here, domestic violence refuges there… when will it end? Well…. actually under the current government those last two services are heading towards an end. Cuts are biting women hard. Who is our Prime Minister? A man. Who is our chancellor? A man. You feel me? Let’s carry on. Come on …don’t drift. Kim Kardashian isn’t going to tell you this stuff by banging her bum cheeks on a table and creating a semaphore message of empowerment for you.

Yes. I said vagina. It’s a thing. So is a penis. Women have one. Men have the other. That’s what Germaine was saying. You remember Germaine? She’s the cool one. The one that did all the fighting for all the cool things I just mentioned that we all benefit from as women.

What depresses radical feminists (don’t get scared of that word – it just means “root” as in “getting to the root of the problem”) is that young feminists are being force fed a version of feminism that is shaped and defined by men. Go and see the film ‘Suffragette’. It will help you understand the terrible effects of men force feeding women. The Suffragettes were radical. They achieved the vote for us all by a campaign of civil disobedience where they destroyed things which men owned… like their shops and their post boxes and their right to take away a woman’s child.

Young feminists tell me, almost as a reflex, that we must include men in feminism. Men can be feminists. Men are NEEDED in feminism. Who on Earth has told them this? There were no men ducking the barriers at the Derby to help Emily Wilding Davison pin a rosette on the King’s horse. There were no men handing the suffragettes rocks to throw through windows. Men have only just rocked up in their little feminist t-shirts to help us with all the feministing.

Well now. Men have told women they must be included of course. (Remember men? They are the ones that control all the stuff. Government and companies and banks and the media and ALL THE OTHER STUFF IN OUR LIVES)

If men can tell feminists they ARE feminists, then they can also tell them what they should and shouldn’t object to…then… ooh… feminists can only grab what the men want them to and Planet Man remains just that – despite the fact that 51% of that planet is walked by women.

So when Germaine Greer is scheduled to talk about ‘Women and Power’ and she is silenced because she thinks a penis is male. Well now….who do we think really needs her to shush up like a good little woman? Who would that be? It could well be the man wearing a “This is what a feminist (who wants to shut up women) looks like” t-shirt. Or the one in a dress, asking us to defend his right to wear it. Couldn’t it?

A counterpetition has been launched regarding Cardiff University’s Hosting of Germaine Greer and has already amassed over 2600 supporters. Click here to get involved.