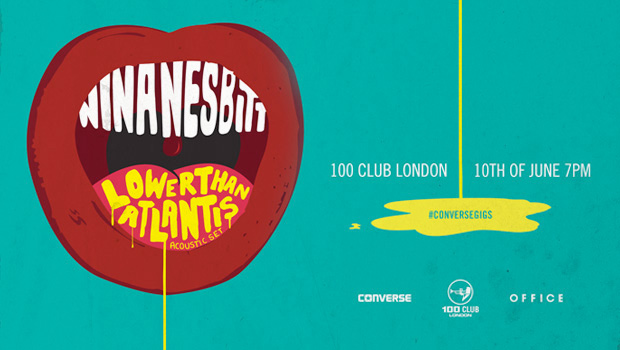 While we look forward to the sun scorching the June sky (fingers crossed), Converse invites you to cool down with an exclusive intimate show with one of Britain’s most exciting young talents, Nina Nesbitt and an acoustic co-headline set from Lower Than Atlantis which promises to beat those Monday night blues.

The show presents two of the hottest up-and-coming acts on the Universal Music UK roster, chosen by the winners of Converse’s ‘Curate Your Own Gig’ competition. The long list of artists was compiled specially for the occasion by Universal’s creative and commercial team, Globe. Run in conjunction with Office for Converse’s recent Get Dirty campaign, this competition has provided an experience that is a first for the 100 Club and the Converse Gigs audience, and promises to be a night like no other.

In the last 18 months Nina Nesbitt has gone from playing tiny Edinburgh shows and relative obscurity to touring with the likes of Ed Sheeran and Example. It all began with Nina uploading her songs to YouTube with videos that she created herself. The songs gathered attention and gained momentum culminating with Nina winning ‘Singer/Songwriter New Artist of the Year 2012’ on iTunes last year. She is currently recording her debut album with Jake Gosling (Paloma Faith, Ed Sheeran, One Direction). Very impressive for an artist who is still only 18 years old.

In 2007 Lower Than Atlantis emerged out of the ashes of the Watford hardcore scene and after years of self-funded albums and constant touring and growing, have now established themselves as one of the UK’s finest rock bands. In 2012 they played their first sell-out headline tour and signed to Island Records. Fusing Punk, Hardcore, Rock with a pop twist, Lower Than Atlantis are a genuine force to be reckoned with.

Tickets are FREE and will be available exclusively from Wednesday 29th May via the Converse UK website: www.converse.co.uk/conversegigs