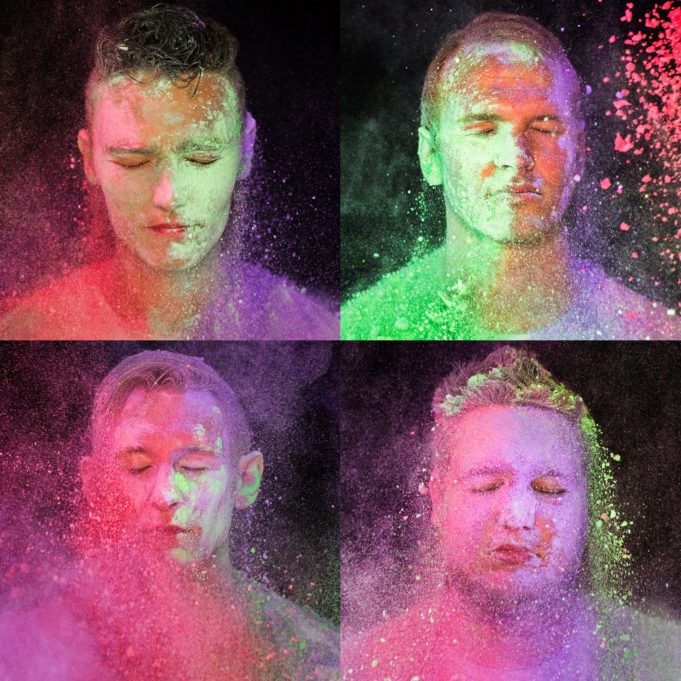 Relatively new to the scene, PowderCloud gives a fresh new take on the boy band stereotype, they release tracks that are addictive, fresh and guaranteed to provide good vibes. Their latest release ‘Heroes’ is a wonderful introduction to the band’s future as they effortlessly create catchy, feel-good tracks that will put you in an upbeat and happy mood.

We sit down with PowderCloud about their upcoming EP ‘Songs From The AM,’ is pop still alive and how their single ‘Heroes’ was actually a lab experiment.

Is pop still alive, and who are your idols?

Yes, in fact, I think it’s more alive than it’s ever been. I feel like pop is accepted as a genre in a much bigger way than was previously the case. For example, ten years ago, you sort of had to say you played indie rock, and then it changed to indie pop, then pop/rock, and now, when you say you play pop, nobody frowns. People seem to think its cool, or they just don’t care.

Within the band, our idols are very different – we are, however, going for a sound likened to that of One Republic, Imagine Dragons, later Coldplay, with an array of varying influences. Collectively we all have a great love for The Beatles.

Guitarist Casper is very much into American rock and grunge and various singer-songwriters, the likes of Pearl Jam, Nirvana, Foo Fighters, Eddie Vedder and Ryan Adams etc. in terms of British music he is a massive Queen fan.

Bassist David is from a classical family, his father is a classical composer and his mother works at a classical publishing firm. He is currently writing his master’s thesis in musicology. He likes Anderson Paak, Dreamtheater, Green Day, Coldplay, Beethoven and many others.

Drummer Mark is a huge Muse fan, but out of all of us probably has the broadest taste as he can listen to almost any genre and find something he enjoys. Some days you’ll find him listening to old jazz tunes from the 1920s, other days the most hard-core dubstep, the softest pop or progressive rock.

My first great love was The Beatles and anything related to that, especially McCartney’s solo stuff, but also very much Lennon and Harrison. This is always my point of departure, and I’m very much into Ryan Tedder’s work as a songwriter and as a lead singer of OneRepublic. Sia, Imagine Dragons, Bruno Mars, John Mayer, Anderson Paak and Coldplay are great inspirations, to name a few.

You guys individually a lot of great things, what is it like to now work in a band of your own and together?

First of all, we’re all great friends who go way back, so the main thing for us was always having fun. But as we realised we kind of had something, our ambitions grew and grew, to the point we are at right now, where we feel like we want to (and could) conquer the world.

Tell us about your latest release ‘Heroes.’

That song was like a lab experiment – we sort of wanted to have a banger, a tune that we could imagine a stadium singing (or shouting) along to. I remember coming up with the verse and bridge, but being quite lost on what the chorus should be like. I think around 10-12 different choruses were written before we found the right one. I remember being in the studio with the guys and our producer, and I came up with this line “Hey hey hey… chase the rainbow” – and I thought it was really cheesy and strange. But I remember Mark yelling “there it is!” and our producer (Henrik Balling), immediately liking it too. The lyrics didn’t really hold up, so we changed those over time. We’d never really done anything like Heroes before, at that time, and since it’s the first release of our new EP, I guess we all think it turned out quite well. It’s true strength, however, is when we play it live – people go nuts when we strike the first chord, and it’s such a fun song to play live.

If you guys could collaborate with anyone who would it be?

Personally, Paul McCartney would be the biggest of them all. Even just grabbing a coffee with him, would be beyond belief. After that, I guess working with great artists, songwriters and producers – Ryan Tedder, Max Martin, OneRepublic, Anderson Paak, Imagine Dragons, Bruno Mars etc. There are so many that we can learn so much from!

What else can we expect from you guys?

We are all very musically curious individuals, so you can definitely expect lots of varying styles in our songs – the three remaining ones from the EP are quite different from each other, and what we’re currently working on is something we’ve never done before. Its amazing to explore different styles and making it fit into our soundscape and universe – I guess we enable each other to always find something new and never just rest on our laurels and rely on the same old recipe for making music.

Who would you say are your influences?

Everything exciting, old as new – but we do like keeping updated with what’s happening, however, not necessarily following it. There is so much great music out there, and so many great artists. In terms of a sound we, as a band, can relate to, OneRepublic and Imagine Dragons are definitely great influences. I think it’s because they so seamlessly merge being a band, but also playing solid pop music, with an edge.

Any plans to come through to London soon?

Mark and I lived there in 2011, where we studied at Tech Music Schools (I think it’s called BIMM today), so at least to us, London feels like our second home. We absolutely love the place. We also feel like our sound is more tailored towards a British and American audience if you look at what’s currently happening on the Danish music scene. We do have some great artists here, though, but making it internationally is the dream for us, (and most others I guess, haha). I guess what I’m trying to say, is that if we have any excuse to swing by London, we’ll leap across the little pond.