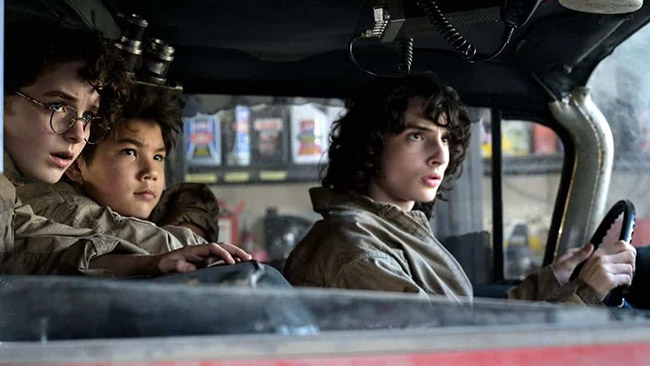 When mentioning Ivan Reitman’s Ghostbusters, audiences of a certain age no doubt look back on a time filled with childhood nostalgia.

Skip forward 37 years and insert Reitman’s offspring Jason – who directs and co-wrote the latest in the franchise instalment – and that nostalgic feeling comes rushing to the surface with the joyous and heartfelt next chapter that pays an abundance of fan service.

Focusing on the Spengler family, Estranged from their recently departed grandfather, Egon’s daughter Callie (Carrie Coon) and grandchildren Trevor (Stranger Things Finn Wolfhard) and Phoebe (McKenna Grace) find themselves upping sticks from the city and moving to a farmhouse in the middle of nowhere’s Ville Summerville after inheriting his house. Trevor, filled with teenage angst and hormones, finally settles into small-town life after he meets skating waitress Lucky (Celeste O’Connor) and becomes so infatuated he gets himself a job at the dinner. Phoebe, on the other hand, the scientific nerd of the family and a dead ringer for Egon, finds herself exploring the house after numerous spooky events and discovers who her grandfather was and exactly what he unearthed before his life was cut short.

Fuelled by a love of the original, Reitman jr – with the guidance of Ivan – and co-writer Gil Kenan have captured the very essence of the original movie and doused it in immense respect with Easter eggs that not only excite but tug on a heartstring or two. Whilst exploring the house Phoebe stumbles upon Proton packs, the old boiler suit and ghost traps while Trevor discovers the dilapidated Ecto-1 in the barn. As a respectful nod to the beloved Slimer, a similar cheeky little entity is born known as Muncher and baby marshmallow men terrorise Paul Rudd’s school teacher/seismologist Mr Grooberson.

Without delving into spoiler territory, Family is key to this storyline with more than a familiar face or two remerging from the shadows. However, this is McKenna Grace’s movie and she steals the show from right under her proton pack. Clever, independent and deadpan in her delivery she oozes magnetic field energy in her performance that simple hypnotizes.

With a direct link to the first movie, Ghostbusters 2 and 2016’s all-female reimaging seem to have been written out of history. The plethora of CGI, whilst technologically advanced, still feels closely related to that of the earlier films and the humour cements this as a creepily yet touching ghostbusting success. Here’s hoping Reitman and the star of this show, McKenna Grace, return to answer the call.