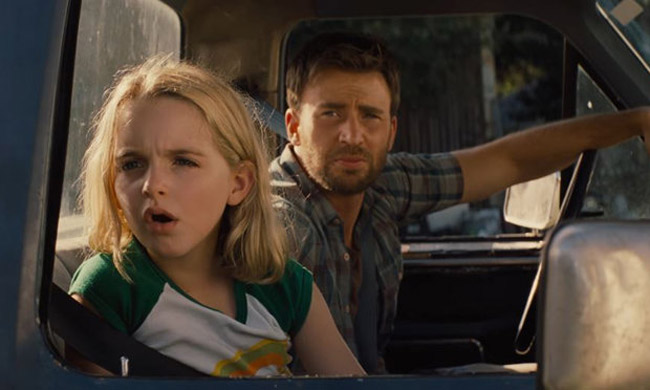 A far cry from his superhero stardom Chris Evans ditches his Captain America persona, finally throwing away the tight lycra suits, only to be upstaged by the ten-year-old McKenna Grace in a super saccharine formulaic concoction designed to tug on the tear ducts with a subtle charm in Gifted.

Breaking free from his web like grip on his Andrew Garfield led Spiderman outings, director Marc Webb chooses to skip down the smooth road of familiarity of the highs and lows of family relationships and a tug of war between the right and wrong ways in bringing up a child genius – Having already dabbled on the theme of relationships in the offbeat 500 Days of Summer, Webb comes at Gifted with a wealth of experience but overcooks by adding in enough honey to even make Winnie the Pooh turn up his nose.

The story centres around Frank and Mary, in which, for a period of time, we are lead to believe former college professor, Frank (Chris Evans) is single handily bringing up his daughter until it finally becomes clear that the feisty and confident child mathematical genius Mary (McKenna Grace) is actually his niece. Taking Mary into his custody after the suicide of his sister, all Frank wants for Mary is a normal life, one a million miles away from what his equally talented sister had to endure and which finally lead to her unhappy death. The heavy hand of protection falls firmly on Franks’ head, fighting against the system who thinks her gifted talents would be better moulded in a more intellectually academic environment.

Evans wholeheartedly takes a backseat to the talents of Grace; dialogue bouncing off each other with a witty repertoire seems to come naturally. As the chemistry sparkles between uncle and niece Grace’s performance is blindingly believable as she reels off equations in her sleep. Mary also has a Mother figure in her life in the form of stoical friend and neighbour Octavia Spencer, who is disappointingly underused.

If the first half is more a character and relationship study, the second takes a dive into a tough custody battle as Franks Mother and Mary’s ice-queen grandmother (Lindsay Durran) enters the fold after she is alerted to Mary’s exceptional gift. For purely selfish reasons she begins court proceedings to take sole custody finally breaking Frank into submission with an agreement for Mary to go into Foster care.

The narrative becomes convoluted from this point onwards, up until this point the man wasn’t for moving but then quite unexpectedly has a change of heart and coldly turns her over – it just doesn’t fit with the previous context already laid firmly in the foundation. However, it does set up a teary ending that could have been seen from half way across the globe.

It’s the central performances from both Grace and Evans that saves this film from only being fit for a straight to TV movie, wonderfully touching at the heart strings of any beating heart but its formulaic plot and its overload on the sugar is dangerous to cinematic health.

Gifted is released in cinemas June 16