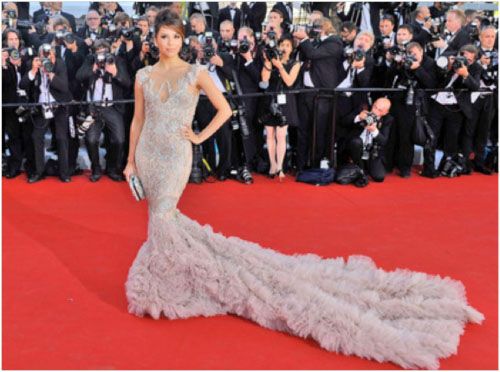 The red carpet turned into a sumptuous runway for a circus of dramatic, statement-making ensembles, from the nostalgic to the fashion-forward, the minimalist to the maximalist.

The Cannes red carpet is a platform for stars to showcase some of the most iconic and memorable fashion pieces to date! So it looks like the series final of Desperate Housewives wasn’t the only thing that stretched too long… Eva Longoria shows us a whole lot of fluff at the opening ceremony of the 2012 Cannes Film Festival in this embroidered Marchesa gown. There is No Doubt that Gwen makes a dramatic entrance in a white Armani gown with striking dark eye makeup and signature red lips. Ravishing in red! This Roberto Cavalli number certainly is a show stopper. This supermodel brings the heat to the South of France, smouldering in a beaded and feathered Roberto Cavalli gown that shows off her fabulous post baby figure! At amfAR’s Cinema Against AIDS gala, the Keeping Up with the Kardashians star flaunted both her legs in a canary yellow Elie Saab silk crepe gown, which featured two hip-high slits. She paired the cleavage-hugging dress (which retails for around US $4,794) with a diamond cuff bracelet, black heels and chandelier earrings. Looking every bit the goddess Ms Shayk wowed at the amfAR Gala 2012 during the Cannes Film Festival 2012. Breath-taking and effortless in a bold Roberto Cavalli at the amfAR Gala 2012 during the Cannes Film Festival 2012. Jessie J jazzes it up in Louis Heal. We are loving the more refined and demure look on Jessie!